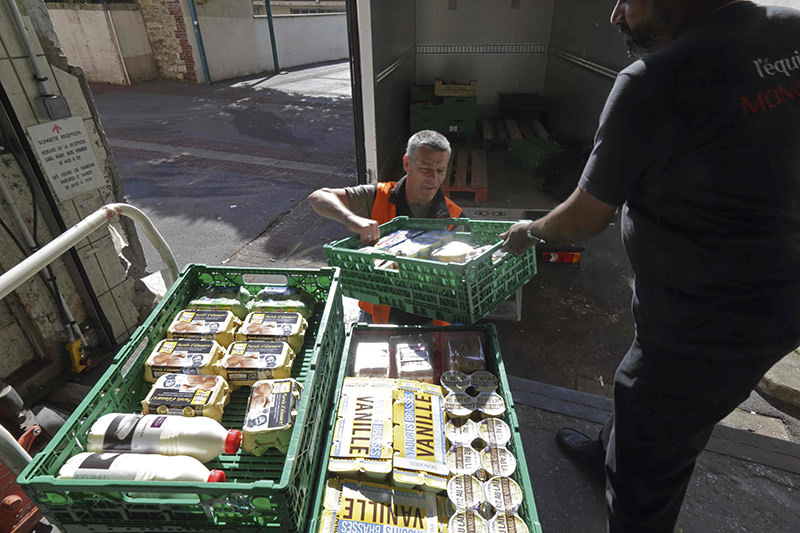 A retired train engineer, who volunteers at the ,Banques Alimentaires, (Food Bank), transfers crates with food goods donated by a supermarket to charity organisations in l'Hay-les-Roses, France, May 26, 2015 (Reuters Photo)
by Anadolu Agency May 27, 2015 12:00 am
The city councilor for Courbevoie on Paris's northwestern outskirts, Arash Derambarsh, whose months-long campaign forcing French supermarkets to redistribute waste food to the poor and homeless, has called on all countries to adopt a similar system.

The 35-year-old lawyer had been campaigning since January to stop supermarkets throwing away tons of food at the end of every day.

"Now we will get the whole world to adopt the same measures," Derambarsh told Anadolu Agency in an interview late on Tuesday.

"Food is basic for everyone, everywhere. Supermarkets, all over the world, waste about 40 kilos of food [each] every day. Why not give it to the poor?

"It is something all Muslim countries, and indeed all countries, can agree on. Countries like Turkey should take advantage of Ramadan to take action."

The new French law obliges supermarkets and food stores to donate leftover food to charities. All major supermarket chains will have to sign an agreement with a charitable organization by next year.

In Derambarsh's home town, hypermarket chain Carrefour has been cooperating with his group since October and will now put the scheme into action across the country.

"We will bring proposals to the G20 in Turkey in the fall and we will take it to the United Nations," he said. "This idea cuts across national and political lines - it is something everyone can agree about." U2 singer Bono's anti-poverty group One has agreed to help Derambarsh bring his proposal to the international stage.
Last Update: May 27, 2015 3:58 pm
RELATED TOPICS