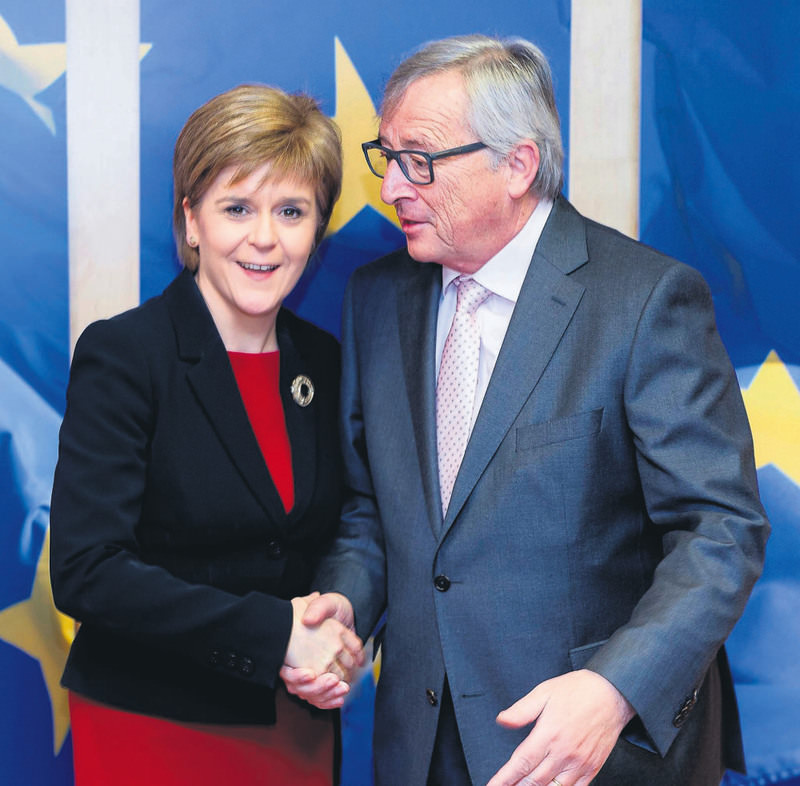 by Daily Sabah Jun 04, 2015 12:00 am
Being more staunchly pro-European than other parts of Britain, Scottish people may vote for a second independence referendum, if Scotland is dragged out of the EU against its will, the Scottish National Party (SNP) leader and the Scottish First Minister warned on Tuesday in Brussels, as reported by the British daily Telegraph.

"If Scotland were to be taken out of Europe, despite voting as a nation to have remained, it would provoke a strong backlash among many ordinary voters in Scotland," Nicola Sturgeon said.

"Bluntly, I believe the groundswell of anger among ordinary people in Scotland in these circumstances could produce a clamor for another independence referendum which may well be unstoppable," she added underscoring the impact of the EU referendum on the possible Scottish independence.

She also suggested to use a so-called "double majority" provision in the the in-out referendum on Britain's EU membership due by the end of 2017 "to ensure that the UK could only leave the EU if each nation within the U.K. voted to do so."

SNP leader also criticized the Conservative government plans on the exclusion of European migrants from voting in the EU referendum, while favoring young people aged 16 and over to be eligible to vote in the referendum. "Denying them a say on an issue that affects them so directly is unfair, it's undemocratic, and it's unjustifiable," she said. As part of a pro-EU campaign from the Labour Party and Scottish National Party (SNP), the lowering of the voting age to 16 is expected to increase the chances of staying in the EU. Young people are more likely to favor Britain's EU membership, as suggested by a poll conducted by YouGov among 18- to 24-year-olds. The Guardian reported that 63 percent want Britain to stay in the EU.

''We need a campaign that concentrates on the real issues that we have to face. An EU-wide strategy to deal with the tragedy unfolding every day in the Mediterranean, a campaign that ensures that we take multi-national action on climate change and that promotes a living wage to give dignity to workers . These are some of the issues – the debate must not be dragged down to the Tory and UKIP Euro- sceptic view which dominates the Westminster parties thinking," Salmon said in a press release on June 1st.

"It is essential we have a distinctly strong Scottish voice in the EU referendum – and that is exactly what the SNP will bring – a campaign that focuses on a positive agenda about Scotland's role and place in the EU," he added.

A survey conducted by the Pew Research Center on the British mood over the EU exit shows that 55 percent of U.K. citizens are in favor of remaining part of the EU bloc. 36 percent wants Britain to leave the EU bloc, the poll suggests. Compared to 2013 findings, this marks an increase, as only 46 percent of U.K. citizens favored EU membership in 2013 while 46 percent favoring leaving.

British Prime Minister Cameron, as part of the Conservative governments' legislative program, demanded structural changes in EU policies on immigration and border control. The proposed plan would reshape Britain's position in the EU, contingent upon the EU leaders' positive attitude toward EU reforms. The plan proposes "controlling migration by making it harder for EU migrants to claim state benefits in Britain, opting out of the EU's commitment to an 'ever closer union' and handing some powers back to national parliaments."
RELATED TOPICS