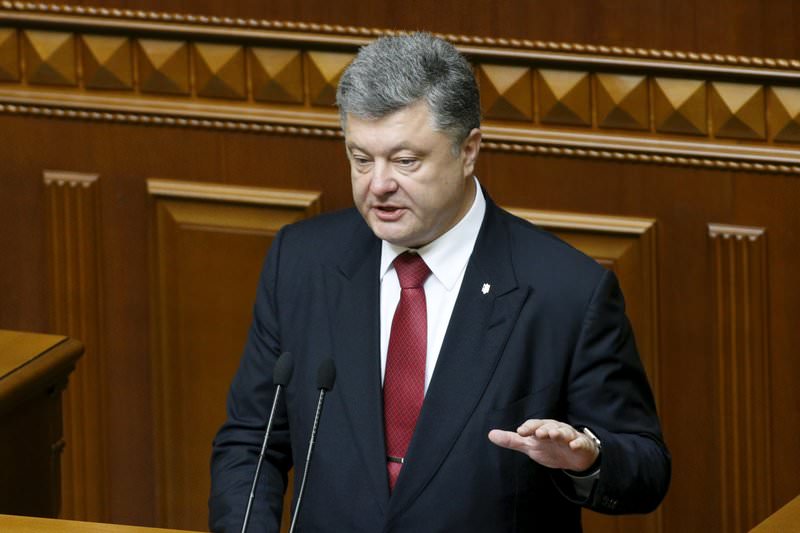 Ukrainian President Petro Poroshenko speaks during his annual state of the nation address to parliament in Kiev, June 4, 2015 (Reuters Photo)
by Jun 04, 2015 12:00 am
Ukrainian President Petro Poroshenko warned Thursday of the "colossal threat" of major clashes in eastern Ukraine where at least 26 people have died in renewed fighting between government forces and pro-Russian rebels. Fresh clashes erupted near the rebel stronghold of Donetsk on Wednesday, in one of the worst outbreaks of violence since a European-brokered truce was agreed to in February.

The upsurge in fighting has revived fears in Kiev that the separatists have used the lull since the truce to regroup and may be gearing up for a new push into government-controlled territory. "There remains a colossal threat of the resumption of large-scale fighting on the part of Russian terrorist groups," Poroshenko said in his annual address to parliament, referring to the insurgents.

Poroshenko alleged that more than 9,000 Russian soldiers were now in east Ukraine to support the rebellion, adding that Moscow kept supplying rebels with new weapons.

The EU expressed alarm over the escalation, calling it "the most serious violation" yet of the February cease-fire. Germany's foreign minister Frank-Walter Steinmeier expressed "great concern" over the "serious violations" of the February truce, warning of the threat of military escalation. "We must urgently aim to bring the situation under control," Steinmeier said. "The truce is fragile; the violations can lead to us again falling back into a state of military escalation."

The Kremlin accused Kiev of seeking to torpedo the truce ahead of an EU summit in June that will include discussions of whether to extend sanctions against Russia, which are set to expire in July. "No doubt these provocations are being organized by the Ukrainian army," Russian President Vladimir Putin's spokesman Dmitry Peskov told reporters. "We are seriously worried by this indeed."

The hot-button issue of Russian sanctions is also expected to come up at a G7 summit in Germany this weekend.

The United States, which has also hit Moscow with stinging sanctions, said it was disturbed by the new clashes, warning that if the crisis escalated, Moscow would face further punishment. Meanwhile, France's foreign ministry called for an immediate end to the fighting.

The Ukrainian Army on Wednesday accused pro-Russian forces of launching a large-scale attack on the settlement of Maryinka, west of Donetsk, in breach of the four-month-old truce brokered by the West.

A senior separatist commander, Eduard Basurin, said 16 rebels and five civilians were killed over the past 24 hours.

An estimated 38 civilians and 86 rebels had also been wounded, he told reporters. Kiev authorities said five soldiers had been killed and 39 wounded in the latest upsurge in fighting.