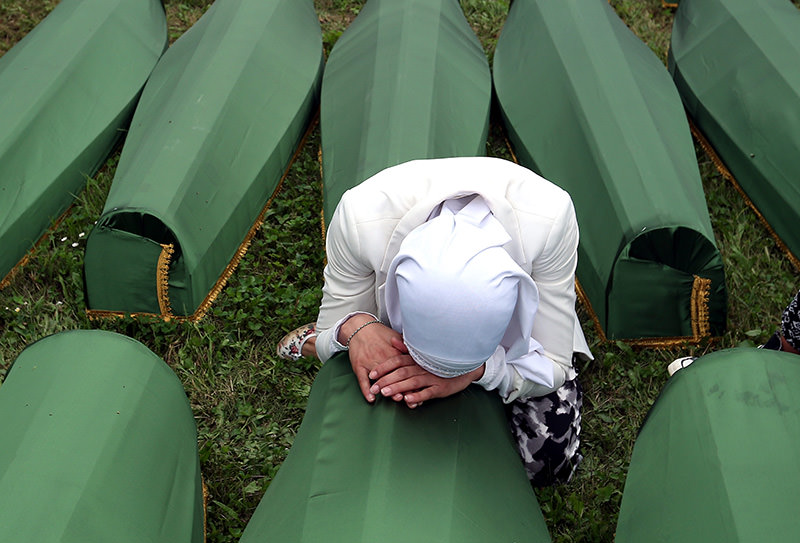 A Bosnian Muslim woman weeping over a casket at the Potocari Memorial Center during the funeral in Srebrenica, Bosnia and Herzegovina, where 175 newly-identified Bosnian Muslims were buried (EPA Photo)
by Anadolu Agency Jun 05, 2015 12:00 am
Women representing the victims of the 1995 Srebrenica massacre on Friday called for Pope Francis to recognize the killings as genocide when he visits Bosnia over the weekend.

The Mothers of Srebrenica, who campaign for the 8,000 men and boys killed by Serbian paramilitaries during the Bosnian war, criticized the pontiff for referring to the deaths as "mass killings" during an earlier sermon.

The deaths were officially recognized by the International Court of Justice as genocide in 2007.

Mothers of Srebrenica President Munira Subasic told Anadolu Agency the pope should use his visit on Saturday to condemn the genocide.

"It has been 20 years since the genocide in Srebrenica," she said. "We Muslims are minorities in the Balkans, just like the Jews. They committed genocide to us like they committed the Holocaust against Jews.

"However, everyone condemns the Holocaust, but not so many people condemn what has been done to Muslims."

Francis angered the relatives of the Srebernica victims in an April 12 sermon in which he called the deaths of Armenians under the Ottoman Empire the 20th century's "first genocide", followed by the horrors of Nazi Germany and Stalin's Soviet Union. He referred to deaths in Cambodia, Rwanda, Burundi and Bosnia as "other mass killings".

The Mothers of Srebrenica also called for the pope to denounce Srebrenica genocide denials. "I hope the pope will condemn the rhetoric from the Serbian side, which continues to deny the truth," Deputy President Kada Hotic said.

Pope Francis's one-day will see him meet all three members of Bosnia's rotating presidency, who represent the country's Bosnian, Croat and Serb communities.

He will also give a public address and hold Mass at Asim Ferhatovic Hase stadium in Sarajevo before meeting clergy at the city's Sacred Heart cathedral. The pope will visit a youth center before leaving at around 8 p.m. local time (1800GMT).