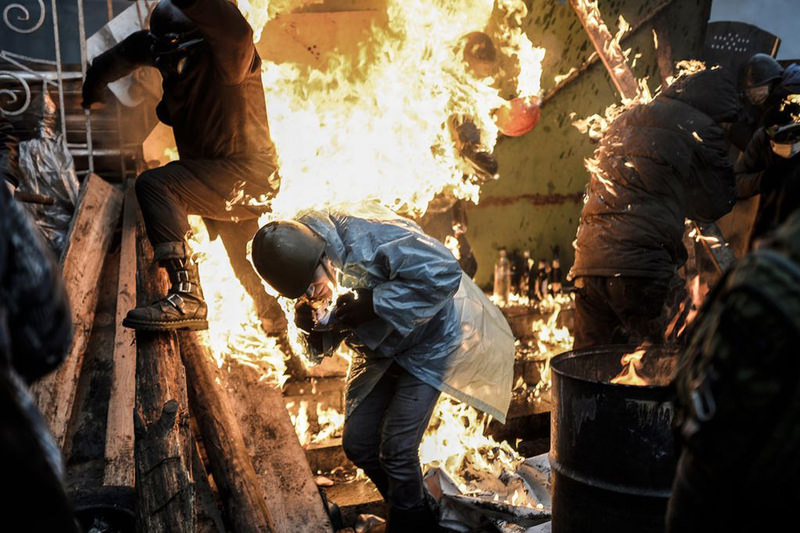 by French Press Agency - AFP
Jun 05, 2015 12:00 am
The UN Security Council will hold an emergency meeting on Friday to discuss the escalation of fighting in Ukraine that is threatening a four-month European-brokered truce. Ukrainian President Petro Poroshenko warned Thursday of a "colossal threat" of renewed fighting with pro-Russian rebels after a surge in violence that left at least 26 people dead.

Fresh clashes erupted near the rebel stronghold of Donetsk on Wednesday, in one of the worst outbreaks of violence since a European-brokered truce was agreed in February.

The upsurge in fighting revived fears in Kiev that the separatists may be gearing up for a new push into government-controlled territory.

In an annual address to parliament, Ukrainian President Petro Poroshenko warned of the "permanent danger" of Russia unleashing "a full-blown war" against Ukraine.

"There remains a colossal threat of resumption of large-scale fighting on the part of Russian terrorist groups," Poroshenko said, referring to the insurgents.

The Ukrainian president claimed that more than 9,000 Russian soldiers were now in east Ukraine to support the rebellion and that Moscow kept supplying separatist forces with new weapons.

The United States, the EU and Germany expressed alarm over the new spiral of violence, with European Commission spokeswoman Maja
Kocijancic calling the clashes "the most serious violation" yet of the February ceasefire.

"The truce is fragile, the violations can lead to us again falling back into a state of military escalation," said German Foreign Minister Frank-Walter Steinmeier.

Charles Kupchan, the US National Security Council's senior director for European affairs, told reporters "we are particularly concerned about the uptick in fighting that we have seen over the last 24 to 48 hours in Ukraine."

"What we see is increased unpredictability, increased insecurity, increased nervousness," the former Norwegian prime minister said.
The Kremlin accused Kiev of seeking to torpedo the truce ahead of an EU summit in June which will discuss whether to extend sanctions against Russia that are set to expire in July.

"No doubt these provocations are being organised by the Ukrainian army," Russian President Vladimir Putin's spokesman Dmitry Peskov told reporters.

"We are seriously worried by this indeed."

"The February 12 Minsk agreements are under constant threat of breaking down because of the actions of the Kiev authorities who are trying to avoid fulfilling their obligations to establish direct dialogue with the Donbass," Lavrov said, referring to the rebel-controlled territory.

The hot-button issue of Russian sanctions is also expected to come up at a G7 summit in Germany this weekend.

The United States, which has also hit Moscow with stinging sanctions, warned Wednesday that should the crisis escalate Moscow would face further punishment.

The Ukrainian army on Wednesday accused pro-Russian forces of launching a large-scale attack on the settlement of Maryinka, west of Donetsk, in breach of the truce brokered by the West.

Senior separatist commander Eduard Basurin said 16 rebels and five civilians had died over the past 24 hours.

An estimated 38 civilians and 86 rebels had also been wounded, he said.

Kiev authorities said that five soldiers had been killed and 39 wounded in the latest upsurge in fighting.

The fighting died down on Wednesday afternoon and authorities said Thursday they were clearing mines and unexploded shells.

A Ukrainian soldier said the rebels were probing at weak spots in Kiev's defense.

"They grouped together and tried to hammer Maryinka. Today they have been trying out Avdiivka," the serviceman, who goes by the call sign Shifer (Slate), told AFP.

A resident of Maryinka, Svetlana Mokraya, said she had spent the previous day hiding in a basement.

"We spent more than 13 hours there," the 49-year-old housewife told AFP. "We'd only emerge outside for one or two minutes when they'd reload the Grads (rocket launchers) I guess."

Separatist forces denied that they had gone on the offensive, saying they had reacted to defend their people from a "genocide."

Kiev and the West accuse Moscow of backing the Russian-speaking rebels with weapons, money and troops.

More than 6,400 people have been killed in the fighting since April 2014, according to the United Nations.

Moscow has repeatedly accused Ukrainian authorities of discriminating against Russian speakers in the east.

As violence flared in Ukraine, Russia's ruble -- battered by the economic crisis brought on by Western sanctions and plunging oil prices -- tumbled on Wednesday, falling by around 3 percent against the dollar and euro to its lowest level in two months.

The currency kept sliding on Thursday, reaching 63 rubles against the euro for the first time since early April.
Last Update: Jun 05, 2015 1:29 am