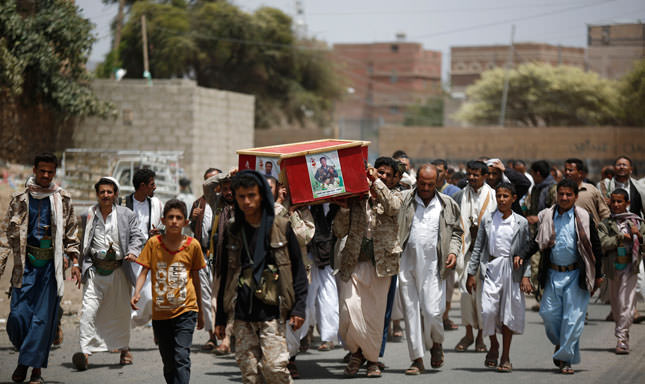 by French Press Agency - AFP
Jun 07, 2015 12:00 am
Twenty civilians were among at least 45 people killed in Saudi-led air strikes on the rebel-held armed forces headquarters in the Yemeni capital on Sunday, a medic said. The raids on the army headquarters in central Sanaa came a day after the kingdom's air defences shot down a Scud missile fired from the war-torn country.

They also followed the UN confirmation of June 14 as the start date for peace talks between warring Yemen factions in Geneva, which both the country's Shiite Huthi rebels and its exiled government said they will attend.

"At least 20 civilians and 25 soldiers and officers were killed" in four raids that hit the headquarters in the Tahrir residential neighbourhood in central Sanaa, the medic said.

The raids hit residential buildings, including five houses that were completely destroyed, witnesses said. The rebel-controlled Saba news agency said 44 people were killed and more than 100 wounded "including woman and children".

In the air war, seven Saudi-led raids also targeted the Jumaineh military base, east of the capital Sanaa, according to witnesses. The base belongs to the elite Republican Guard that has remained loyal to former president Ali Abdullah Saleh, who has allied himself with the Huthis.
Other raids hit an arms depot at Nahdain, south of Sanaa.

Several rebel positions in the north, mainly in the Huthi stronghold Saada province and the provinces of Hajja and Amran, were heavily bombarded overnight by the coalition, witnesses said.

Fighters from the southern Popular Resistance were attempting to prevent rebels from advancing towards the neighbourhoods of Al-Masnoura, Dar Saad, Sheikh Othman and Al-Buraiqa, according to a pro-Hadi military commander.

Yemen has been engulfed in turmoil since the Iranian-backed Huthis seized the capital in September and advanced on the southern city of Aden, forcing Hadi to flee into exile in Saudi Arabia.

The Saudi-led coalition has carried out air strikes on Yemen since March 26 to push back the Huthis and restore Hadi's authority. More than 2,000 people have died since the air campaign began.

The United Nations has urged Yemeni parties to engage in talks in Geneva without preconditions.

The meeting would be the first significant effort to stop the fighting, which has led to what the UN says is a catastrophic humanitarian situation. Huthi rebels said they will attend the talks, and Yemen's government exiled in Riyadh also said it would take part.

In line with UN Security Council Resolution 2216, Hadi's government had refused to attend unless the rebels pulled back from at least some of the territory they have seized.
Last Update: Jun 07, 2015 11:26 pm