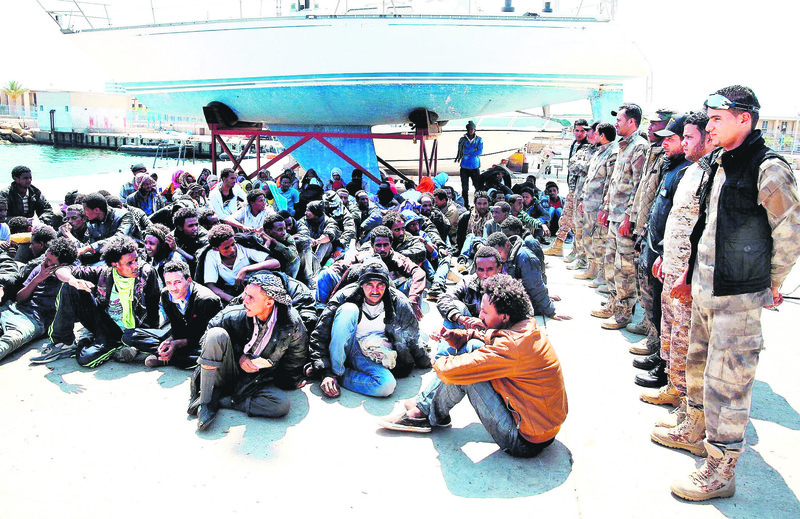 Dozens of migrants who were seeking to reach European coasts were rescued by Libyan coastal guards.
by Daily Sabah with Wires Jun 08, 2015 12:00 am

A major migrant rescue operation was launched on Sunday to help save nearly 1,500 people in migrant boats as European countries expect up to 500,000 people to cross the Mediterranean to reach European shores

British, Swedish, Spanish and Italian ships were en route to help about 10 migrant boats that called for assistance on Sunday, the Italian coastguard said, following the rescue of thousands of others in the Mediterranean this weekend. The British warship HMS Bulwark launched a mission to rescue at least 500 migrants, the Ministry of Defense said in a statement. The MoD said a helicopter had identified four migrant vessels in distress. "HMS Bulwark has now commenced rescue operations to recover those in the vessels," the statement said. The Italian coastguard, who coordinates rescue efforts from Rome, said a total of 10 distress calls had been received. Apart from the international group of navy ships in the area, a Singapore-based merchant ship had also been called in to help, a coastguard spokesman said. Melissa Fleming, chief spokeswoman for the UN refugee agency, said on Twitter that up to 1,500 people were thought to be aboard the 10 boats. The coastguard would not speculate on the number. On Saturday, 3,500 migrants were rescued from nine wooden boats and six rubber ones about 45 miles from the Libyan coast.

The European Union has bolstered its presence in the Mediterranean between Sicily and Libya to help rescue people in boats which are taking advantage of the calm summer seas to attempt the crossing. But, the EU is still debating how to handle the refugees and migrants once they are ashore.

As the EU draws up plans for military operations on Libyan shores targeting vessels used by human traffickers, the international human rights organization, Human Rights Watch (HRW) called on naval operations to be compatible with human rights law. On May 18, EU nations approved plans for the unprecedented naval mission called EUNAVFOR Med, but the U.N. resolution must pass before boats that belong to smuggling gangs in Libyan waters – where political turmoil has created a safe harbor for traffickers – can be destroyed. The naval mission is expected to launch this month to fight the human traffickers behind the deluge of migrants and refugees attempting the dangerous crossing from crisis-hit Libya. However, Libya strictly refuses to give consent to the EU's naval operation asserting that the military operation at Libyan coast would harm the country's territorial integrity.

The maritime operation aims primarily to protect European borders from the unprecedented influx of migrants attempting to reach the bloc's southern shores – who pay smugglers to place them on dangerous, overcrowded vessels – as well as to prevent the loss of lives at sea. As illegal migration crisis and human trafficking become a crucial global problem, Libya draws attention not because of ongoing turmoil across the country but of becoming a major hub for people smugglers who are committed grave human rights violation.

The worst Mediterranean disaster in decades took place in April when a trawler packed with migrants capsized off the coast of Libya, killing around 800 people.

In addition, the EU interior ministers are due to discuss a European Commission plan in Luxembourg on June 16 to relocate 40,000 asylum seekers from Italy and Greece to other EU member states. The Commission's plan also foresees bolstering the enforcement of an EU treaty that says an asylum seeker must seek refuge in the nation where he or she enters the bloc.

The increasingly violent and chaotic situation in the Middle East has led many people to flee the conflict in an attempt to seek security and shelter in more prosperous and peaceful countries in Europe. Over 218,000 refugees and migrants arrived in Europe via the Mediterranean in 2014, as indicated by the U.N. More than 110,000 migrants crossed through Libyan territory in 2014 alone, according to the U.N. figures. These numbers have been gradually increasing as hundreds of immigrants hope to reach the European shores of Italy, Malta, Spain, Greece and Cyprus.
Last Update: Jun 08, 2015 1:34 am
RELATED TOPICS