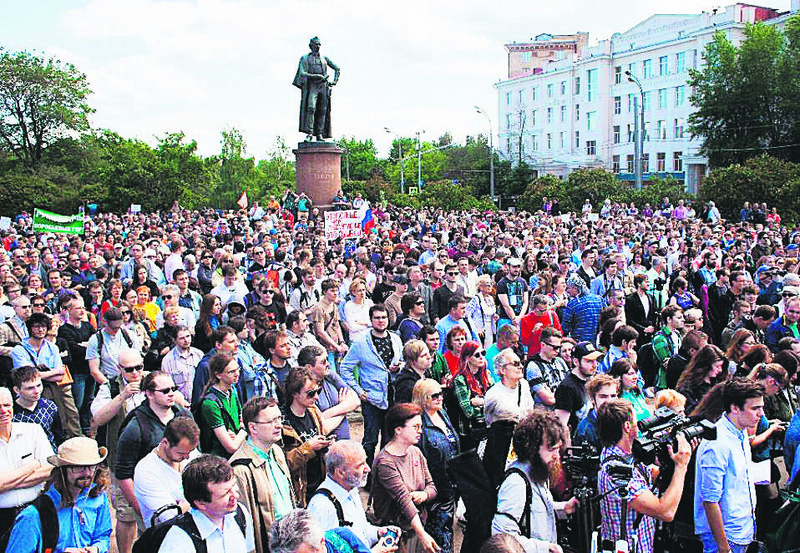 by Jun 08, 2015 12:00 am
Russian scientists staged a rare anti-government demonstration Saturday as fears mount that they will be next in the line of fire after Kremlin crackdowns on the media, rights activists and the opposition. Several thousand protesters including scientists and intellectuals took to the streets of Moscow to express fears for the future of scientific research, which is becoming mired in red tape and mismanagement. Prominent opposition figures including top activist Alexei Navalny joined the rally. Protesters held up placards reading "Authorities are strangling science", "Nobel laureates are foreign agents" and "Putin cannot solve problems, he is the problem". Astrophysicist Boris Shtern told the rally: "Alas, science is slowly dying. The massive advance of ignorance is being supported by the media and authorities." The protest was originally called in support of a top private foundation whose 82-year-old founder, philanthropist Dmitry Zimin, has come under fire for financing Russian science from overseas accounts. Discontent among scientists has been brewing for months but the crackdown against Zimin's Dynasty Foundation sparked acute anger and disbelief. The justice ministry in late May added the ex-telecoms magnate's Dynasty foundation to its list of "foreign agents" under a law that critics say is designed to muzzle critics of President Vladimir Putin. Zimin, a widely respected former radio engineer who spent millions of dollars supporting scientific research, has threatened to shut down his foundation, demanded an apology from the authorities and temporarily left Russia.

An AFP correspondent said more than 2,000 people turned up at the rally, while activists counted some 3,500 participants. Antonina Aleksandrova, a biologist at a cancer treatment center, slammed the attack against Zimin's foundation whose grant recipients include groups promoting liberal values. "For the country to develop, it needs education," Aleksandrova told AFP. "The Dynasty is an egregious example of how an organization that played a huge role in this education has been crushed." "It is a significant loss for us all." Some rally participants held books published with the help of Zimin's fund.

Physicist Vladimir Olshansky said he found the current atmosphere of "lies and obscurantism" offensive. He said the Kremlin was threatened by free-wheeling scientists and their independent-minded benefactors. "The authorities believe that they themselves know who to give money to." Chemist Efim Brodsky added: "What's happening threatens the country more than science."

Critics accuse the Russian government of boosting defense spending at the expense of science, education and health care as tensions with the West run high. Some have said that Russia appears to be losing its competitive edge in space, pointing to a recent string of mishaps. Many supporters praise Zimin as a rare Russian philanthropist who instead of flaunting his wealth like many fellow tycoons chooses to support a young generation of scientists. "Without the Dynasty young scientists would begin leaving the country abruptly," Mikhail Nikitin, a 32-year-old biologist, told AFP, adding that he was finishing a book he was hoping could be published with the help of the fund. "For many young scientists the Dynasty's grants were the only reason to stay in Russia," he said. More than 250 Russian scientists, most of them working abroad, signed an open letter in support of Zimin, saying they were "outraged and extremely worried" by the pressure on the fund and its possible consequences. Zimin's foundation has a 2015 budget of 435 million rubles ($7.7 million at the current exchange rate). "My money is kept abroad," Zimin, who founded mobile telecommunications giant VimpelCom in 1992, told Russian reporters. "But Russia also keeps its money abroad." The Dynasty will convene a meeting on Monday to decide its future strategy. Putin signed the law on "foreign agents" in 2012, after huge opposition protests, and described the legislation as "self-defence" against the financing of political activities in the country from abroad. Scores of rights groups resent the tag carrying connotations of Cold War espionage.
Last Update: Jun 08, 2015 1:33 am
RELATED TOPICS