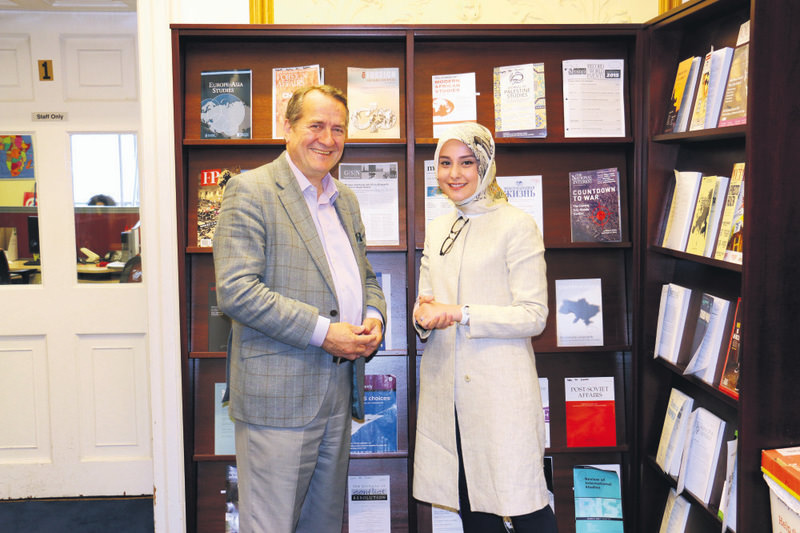 Following the general elections in the U.K. in which the Conservatives gained a majority in parliament, the country is mulling over leaving the EU. Financial Times columnist Peel says the attitude harms the country

The general elections in the U.K. last month left the country divided between Scotland and England and with troubled relations with neighbors. British Prime Minister David Cameron was not expecting to be the outright winner of the elections. His Conservative party received the majority by winning 37 percent of the vote. Cameron is in trouble with his own election manifesto and the success of the Scottish National Party (SNP). Even though he might have a difficult time keeping some promises, he is forging ahead with his plans to hold an EU referendum.

Speaking to Daily Sabah, Quentin Peel, who has worked for The Financial Times for around 35 years, said Cameron is risking the integrity of the country. "In this tension within the U.K., between Scotland and England, that emerged from the elections, Cameron has a very important thing to keep in mind. If he loses a referendum on Europe, the Scottish will almost certainly hold another referendum on Scottish membership in the U.K. and the chances are this time they would vote for independence. The direct consequence of Britain voting to leave Europe could be the end of the U.K. with Scotland leaving and applying to the EU as an independent state. Cameron is a man who is prepared to put the integrity of the U.K. as well as British membership in the EU on the line in a referendum with a very unpredictable outcome." Peel, who is also Mercator senior fellow on the European program at Chatham House, said an exit from the EU would be a disaster for the U.K. and very damaging for the EU.

"On the British side, it would require very strong renegotiations on our terms to maintain relations with the EU. The British are arrogant enough to assume that their partners will give them a very good deal; having in fact just saying to their partners that we don't want to be in your club. My impression is that other European countries, while they are very keen to keep Britain in, if Britain finally decides to go, they would not be inclined to give a good deal to Britain. The EU does not want the British example to be followed by other countries. It would be an enormously difficult exit process from the EU side. It would be very damaging in global terms to have one of the three largest countries in the EU with a global role to actually leave, saying we do not want to be a member of this club any longer. Because it would persuade people like the Chinese or Turkey and Brazil or major countries around the world to say maybe the EU is starting to fall apart. In terms of image it is very serious. Cameron has a very difficult balancing act to do. He has got to please two very different constituencies. I think this is why he is still very vague about what he really wants to negotiate. He talks about changing the conditions of membership of Britain in Europe but none of the substance of what he is talking about changes the conditions of membership. The danger is he is going to present what he is doing as a major negotiation, but the reality is that it is a minor negotiation. He will have to have the referendum that he promised the country, pretending the minor negotiation is a major one. If that blows up in his face, he faces a danger of leaving Europe by accident. He will want to stay in, but he will play it badly. I think that is the dilemma he has. The likelihood is he will get some concessions and British voters will vote not to change the present situation. The vote to leave would be dramatic. The danger is that if he cannot persuade British electors that he got significant changes and reforms in Europe, he will lose the referendum. I believe the British exaggerated their importance in the EU. Being semi-attached for so long on European issues they are no longer anything like as important as they used to be. They no longer have anything like the influence in European decisions," he said.

Cameron is having problems with internal issues in his country as well. During his election campaign he made some promises that may put him in a hard position. At the same time, winning with such a small majority gives the opposition a chance to raise its voice.

"The elections put into power a government which wasn't actually expected to win an outright majority and made as a result rather rash promises in their election manifesto. I believe they have expected that after the election they would have a coalition again. They would be negotiating on a compromise. They landed with all the promises they have made with nobody to negotiate. For example, promises they have made to new home buyers will be very expensive at just the moment when they cut their spending, cut their budget deficit and cut their government borrowing. It will be a very difficult balancing act for a party that has a rather small majority. They will always have the danger of facing a rebellion. On the one hand, it looks like the most stable situation of a majority government, on the other hand, I think there is a lot of potential for instability because the main party has such a small majority," Peel said.

General elections in the U.K. were held on May 7. The Conservatives led by Cameron won a surprising victory gaining enough of a majority to form a government. The most controversial topic of the elections was Cameron's pledge of an in-out referendum on EU membership by 2017. The SNP's success in the elections raised tension between Scotland and England.
RELATED TOPICS