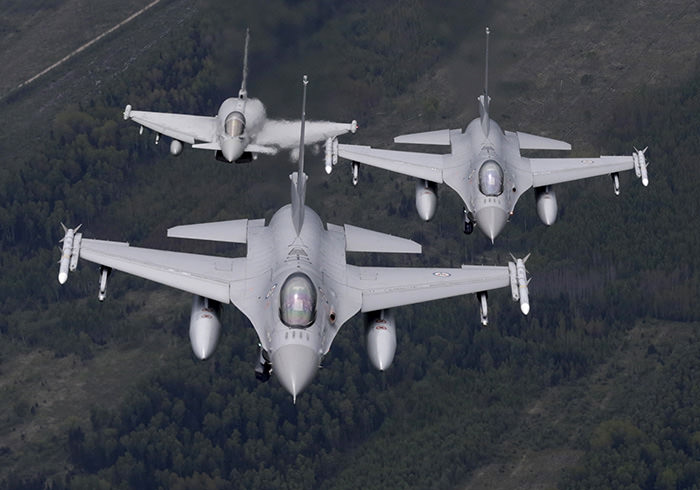 Norway's Air Force F-16 fighters (front) and Italy's Air Force Eurofighter Typhoon fighter patrol over the Baltics during a NATO air policing mission from Zokniai air base near Siauliai, Lithuania, May 20, 2015 (Reuters Photo)
by Daily Sabah Jun 11, 2015 12:00 am
Following the North Atlantic Treaty Organization (NATO) air force drill over the Arctic in the face of the growing Russian threat, the general publics in NATO countries oppose taking part in a military operation against Russia to defend a NATO ally or pro-Western countries like Ukraine, according to a survey conducted by the U.S. -based think tank, Pew Research Center on June 10. The survey suggests that NATO's European nations blame Russia for the continuing violence in the crisis-hit eastern Ukraine. However, only a few NATO nations "support sending arms to Ukraine" despite seeing Russia as a military threat. "In response to the Ukraine crisis, 70 percent of allied countries say Western countries should send economic aid to Ukraine. Fifty-seven percent supports Ukraine becoming a member of NATO," the survey said revealing that NATO countries are more reluctant to send military aid to Ukraine.

Some 53 percent of the French public opposes military intervention against Russia in Ukraine while 58 percent of those polled in Germany oppose a possible military operation. Sixty-five percent of French people also think "the U.S. would use military force to defend [Ukraine]."

After the annexation of Ukraine's Crimea by Russia in March of last year, there has been growing fear among European countries that the Cold War years could be making a return. Russia's increased militarization of rebel-held areas in the Donbass region of Ukraine in the country's east and its explicit support of pro-Russian separatists who are fighting an insurgency for regional leadership close to Russia, have prompted fears among Western countries. As tension between Russia and the West grows, the ex-Soviet Baltic States and Scandinavian countries see Russia as a clear threat to their national security and territorial integrity. After four Russian jets violated Finnish airspace, Finland warned EU countries and the U.S. to take affirmative action against the Russian threat that has ignited old Cold-War fears and rhetoric in ex-Soviet Baltic States.
Last Update: Jun 11, 2015 4:14 pm
RELATED TOPICS