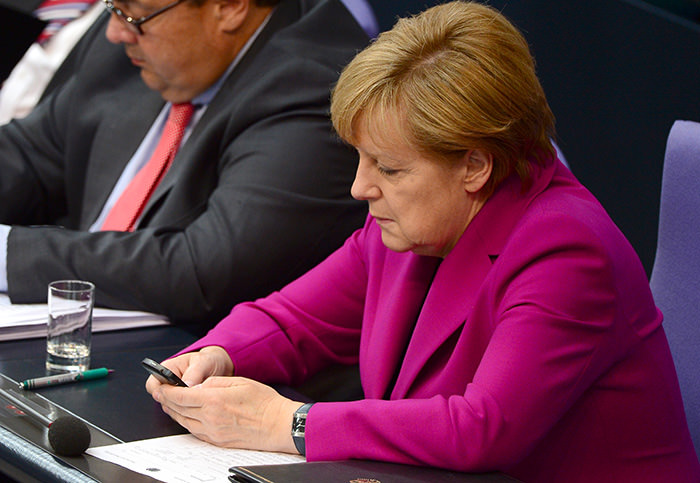 German Chancellor Angela Merkel (R) reading her mobile phone during a session of the Bundestag Lower House of parliament in Berlin (AFP Photo)
by Associated Press Jun 12, 2015 12:00 am
German federal prosecutors have closed their investigation into the alleged tapping of Chancellor Angela Merkel's cellphone by the U.S. National Security Agency, saying they have been unable to find evidence that would stand up in court.

Prosecutors last June opened an investigation into the alleged monitoring of a cellphone Merkel used for party business, an issue that has weighed on relations between Germany and the U.S. However, chief prosecutor Harald Range signaled in December that the probe wasn't going well, saying that he had found no actionable evidence.

His office said Friday that the investigation is being closed, saying that it doesn't have an original document proving the alleged spying and documents published in the media don't provide evidence that would stand up in court.
Last Update: Jun 12, 2015 12:33 pm
RELATED TOPICS