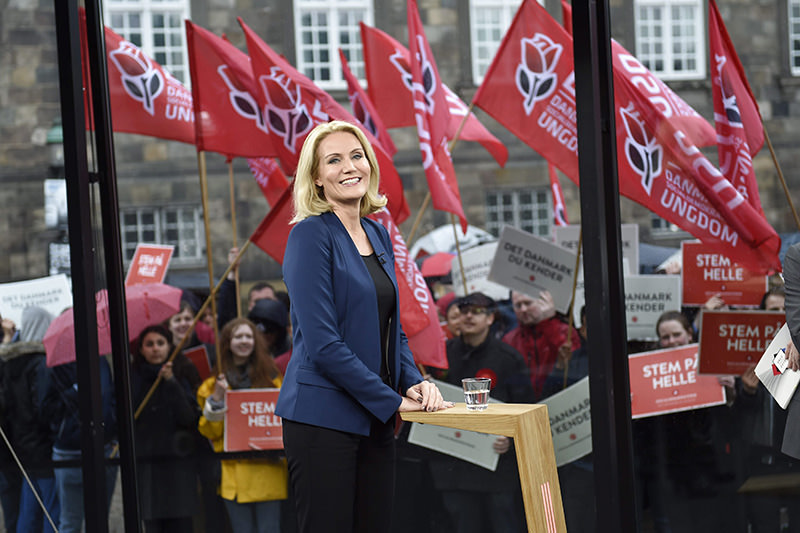 Danish Prime Minister Helle Thorning-Schmidt attends the first one-on-one debate of the Danish election 2015 with Danish opposition leader Lars Loekke Rasmussen (unseen) of the Venstre party, in Copenhagen, 31 May 2015 (EPA Photo)
by reuters
Jun 14, 2015 12:00 am
Recalling how a group of refugees once threatened his life if he did not retract a police statement, Frank Pedersen is angry about the increasing number of immigrants in Denmark.

They are, he says, running riot in Tonder, the small town on the border with Germany where he lives with his wife and small child and works at the local Jobcentre.

"I see a problem with more and more coming. It's an issue when nothing is being done in areas where they commit crimes. Tipping over social workers' cars so they have to ride in pairs out of fear," the 41-year-old navy veteran said.

Pedersen was one of around 200 people who gathered for a garden party held at a former border post with Germany by the right-wing Danish People's Party (DF). The location was apt: the party wants to reintroduce border controls, scrapped after Denmark entered the passport-free Schengen zone.

Little over a week before a parliamentary election, in which DF has a chance of entering a governing coalition, immigration has become a hot topic and the party's rhetoric on curbing foreigners coming to Denmark has been adopted by mainstream parties.

The leader of the main opposition Liberals said if elected, he would hold an emergency session of parliament during the summer to tighten controls and introduce measures such as refusing permanent permits to unemployed immigrants.

"We can look at the figures and see that if we do not do something we will get a massive influx after the summer," Liberals leader Lars Lokke Rasmussen said. "We can't just sit around and wait until October, because we know the pressure is greatest in the summer months," he said, referring to when parliament resumes after its summer recess.

Earlier this year the government announced measures which will make it harder for people to claim asylum, which would mean more refugees are granted only short-term permits and it would be harder for their families to join them in Denmark.

"Fewer must come than last year because it is hard to keep up," she said. "If peace emerges in the country the refugees come from, then people should go back home."

She did not identify any such country.

The number of asylum seekers doubled last year as Syrians fled conflict at home to more than 14,000 people. That compares to 664,000 asylum applications in the whole of Europe, ranking Denmark fifth in proportion to its population. Sweden next door received more than 80,000, by far the largest intake in Europe compared to its population.

Much of the debate as reported in the media is tinged with Islamophobia. For some headscarves, calls to prayer and minarets are an affront to a homogenous Danish culture, and associated with a small group of extremists.

DF, whose members in the past have branded Islam a plague and called for mosques to be shut down, has been more nuanced during the campaign to widen its appeal.

"They are changing society. We are not in favour in having for example a mosque's call for prayer," DF leader Kristian Thulesen Dahl told Reuters in an interview. "It's not that they are Muslim, that is not the problem. It is that people coming to Denmark, living in Denmark, must respect the society."

While most of the country's 260,000 Muslims are moderate, and some figures suggest fewer than half are practicing, the media focus on a handful of radicals such as two who last week urged Muslims not to vote, shouting 'To hell with the constitution' and calling Denmark a dictatorship.

The pair praised and attended the funeral of Omar Hussein, the Copenhagen gunman who attacked a free speech event and a synagogue, killing two. He had been rapidly radicalised in the months before the attack.

"When you read about the people who want sharia law in Copenhagen and disallow voting, what kind of 'thank you' is that? Shouldn't they just be happy they're allowed to be here," Richard Gugolka, the son of a Polish immigrant, said at the border event.

"I'm not allowed to say it, but we need to decide what kind of refugees we want to take in," he said.

Such views, and the events that have prompted them, make many Muslims in Denmark feel alienated. Muslim leaders and politicians immediately condemned the pair and Hizb-ut-Tahrir, the radical group with which they are often associated.

"Hizb ut-Tahrir is extremely desperate because more and more mosques and more and more imams preach democracy," retorted Ã–zlem Cekic, a Turkish-born member of parliament for a smaller party. "They have become completely isolated, and therefore it is important to emphasize that they talk nonsense."

Meanwhile some leftwing politicians despair of the mainstream parties' 'race to the bottom' on the issue.

"They are competing on who will make the toughest rules. Thorning boasts she has deprived children the right to get to safety with their parents in Denmark," Johanne Schmidt-Nielsen, a politician and activist, wrote on Facebook.