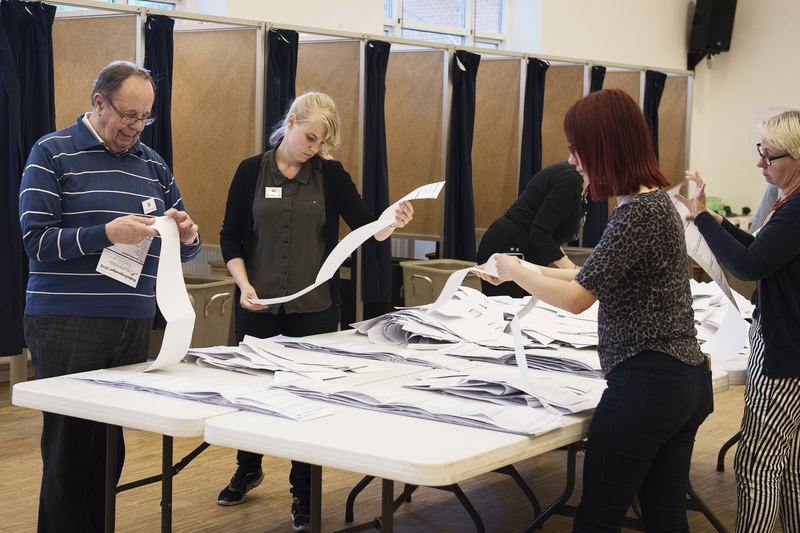 by Associated Press Jun 19, 2015 12:00 am
Denmark's center-right opposition appeared set to win the country's parliamentary election Thursday, with partial results showing it in a clear lead over the left-leaning governing coalition.

With more than 80 percent of votes counted, Denmark's national broadcasters DR and TV2 projected opposition leader Lars Loekke Rasmussen's bloc would get more than the 90 seats needed to secure a majority in the 179-seat legislature.

"As it looks now it seems we have lost the election," said Carsten Hansen, a senior member of the governing Social Democratic Party.

Earlier, an exit poll by TV2 showed Social Democratic Prime Minister Helle Thorning-Schmidt's coalition trailing by just one seat. That would leave the race open because it doesn't count the four seats from semi-autonomous Greenland and the Faeroe Islands.

The poll was based on about 6,000 interviews and had a margin of error of about 3 percentage points. Kasper Jensen of polling institute Megafon sounded a note of caution, saying the exit poll wasn't a final result.

Thorning-Schmidt's Social Democrats and Loekke Rasmussen's Liberals depend on other parties to build a majority in the Folketing, or Parliament.

In addition to the 175 seats decided by voters in Denmark, the Faeroe Islands and Greenland get two seats each. The two territories in the North Atlantic have self-rule except on matters such as foreign and defense policy.

Currently, the government bloc has three of the four seats. Polling stations in the Faeroes closed at 1900 GMT (3 p.m. EDT) while those in Greenland were to shut down three hours later.

The last time the North Atlantic vote decided a Danish election was in 1998, when the Social Democrats won.

Election campaigns focused on welfare spending, the economy and immigration, with both Thorning-Schmidt and Loekke Rasmussen promising to further tighten Denmark's controls on immigrants.

Loekke Rasmussen, a former prime minister, needs support from the populist Danish People's Party, which wants to reintroduce border controls against neighboring countries. That's controversial among many in the European Union who feel it would challenge the idea of a borderless Europe. But Loekke Rasmussen appeared to endorse the proposal as he cast his vote in Copenhagen.

"I want an open Denmark, but I also want a Denmark that is efficiently shut for people who don't want our country," Loekke Rasmussen told reporters.

Thorning-Schmidt voted not too far away, accompanied by her husband, Stephen Kinnock, who was elected to Britain's Parliament for the Labour Party in Aberavon last month. He wasn't voting.

"That road we have steered Denmark onto, where we have a grip on the economy, where there is money for the welfare, if that is the way you want to take, then you must vote for the Social Democrats," she said.

The partial results showed a drop for Loekke Rasmussen's Liberal Party, gains by the Danish People's Party and the Social Democrats largely unchanged with one-quarter of the votes.

Thorning-Schmidt has pledged to raise welfare spending by 39 billion kroner ($5.7 billion), while the opposition says that improvements can be achieved without expanding the public sector.

Candidates were campaigning until the very end, handing out leaflets, flowers, balloons and sweets to voters on the streets and squares of the Scandinavian country of 5.6 million. According to pollsters, up to 20 percent of Danish voters had not made up their minds before the election.
RELATED TOPICS