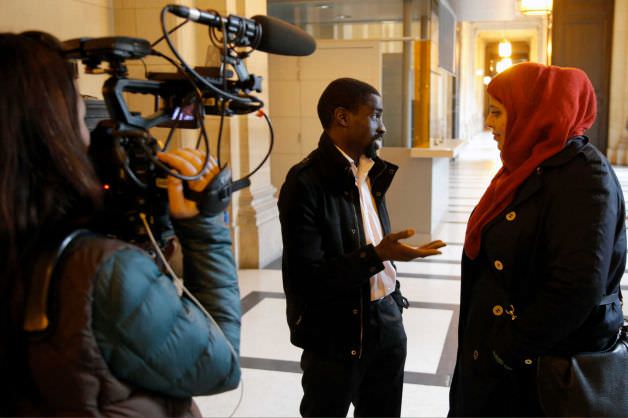 by Associated Press Jun 24, 2015 12:00 am
A French appeals court ruled Wednesday that police carried out unjustified identity checks on five minority men based on their racial profiles, ordering the government to pay them damages in an unprecedented ruling that activists hope will help reduce widespread discrimination.

The collective case, which included 13 men, all black or of Arab origin, was the first of its kind in France, where anti-racism groups say non-whites are unfairly targeted by police. Gratuitous ID checks have long been cited as a prime reason for troubled relations between police and the residents of poor suburbs.

Lawyers for the 13 who sued the state hailed the ruling as a breakthrough and said they are already planning to pepper the state with a raft of new lawsuits. They were still debating whether to take the eight cases that were not overturned to the Court of Cassation, France's highest court.

None of the 13 men had a police record, but each said he was victim of multiple, humiliating ID checks, widely known as "stop and frisk" and considered by French police to be an important crime-fighting tactic.

"We struck at the heart of the system" by attacking the state," said Felx de Belloy, one of the lawyers in the case. "This is a big victory for our clients. But it's also a big victory for everyone, notably young people, black or North African, who each day are controlled (by police) mainly because of the color of their skin."

However, the victory was partial. The eight who failed to win on appeal were subjected to identity checks in high-crime neighborhoods.

"One part of the job is done, but there is a big piece missing," said Slim Ben Achour, the second lawyer in the case.

The Paris appeals court partially overturned a 2013 lower court ruling that police did not overstep legal boundaries with the ID checks. The appeals court ordered the state to pay 1,500 euros ($1,680) euros to each of the five men and the same sum to cover legal fees.

Those subjected to constant identity checks say there is never any official trace they have taken place making them nearly impossible to prove in a formal complaint.

A study conducted in Paris by France's National Center for Scientific Research and the Open Society Justice Initiative, which backed the legal action, has shown that blacks have six times more chance of being checked by police than whites, and those of Arab origin have eight times more chance.

"We've already advanced the debate. ...Five out of 13 isn't nothing," said Niane Bocar, 36, one of the eight whose suits were rejected. The court ruled that because he was running out of a building, his face hidden by a hoodie in a high-crime district, his behavior was suspect and the ID check "justified."

While police reform has become a hot topic in the U.S., it has little resonance in France. The lower court initially ruled that police action does not fall within the boundaries of an anti-discrimination law considered applicable only to employees.