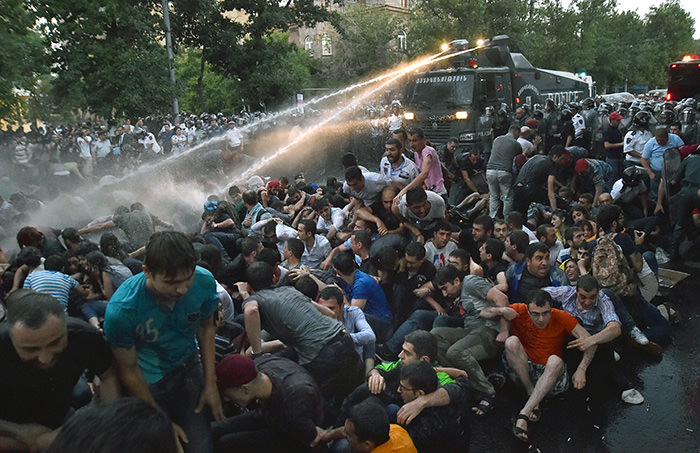 rmenian police forces use water cannons against protesting against plans of the government to raise electricity prices for up to 40 per cent, in Yerevan, Armenia (EPA Photo)
by Jun 24, 2015 12:00 am
Hundreds of protesters defied police on Wednesday in the Armenian capital, Yerevan, ignoring a call to disperse and digging in for a new day of protests against electricity price hikes and police violence.

On Wednesday more than 6,000 demonstrators rallied near the presidential palace and hundreds stayed for an overnight sit-in, blocking traffic on Yerevan's main thoroughfare and defying a police ultimatum to disperse before 6 a.m. on Wednesday.

Public anger has mounted over the government's decision to hike power prices by over 16 percent from August 1 in the poor ex-Soviet country of 3.2 million, which has already been badly hit by the economic crisis in Russia.

The protests started on Friday and gained momentum after hundreds of riot police moved in early Tuesday to forcefully break up a rally using water cannon, in the most serious confrontation between protesters and police in the past few years.

Police beat up journalists and detained nearly 240 people, but protesters took to the streets for a new protest Tuesday evening.

Supporters sought to prevent a repeat of clashes, with opposition lawmakers and local celebrities forming a human chain between riot police and the demonstrators overnight.

The protest hashtag #ElectricYerevan was gaining traction on Twitter, with supporters taking to social networks to buttress the campaign.

Some of the nearly 240 protesters detained Tuesday remained in custody as of Wednesday morning.

Armenia, an ally of Moscow, has been hit hard by the economic crisis in Russia brought on by falling oil prices and Western sanctions over Ukraine.

Exports to Russia -- Armenia's foremost trading partner -- have fallen, as have remittances from Armenians working there, an important source of income for many families.

Russian President Vladimir Putin's spokesman told reporters on Tuesday that Moscow was closely watching the protests and expressed hope that the situation would be settled in "strict accordance with the law."
Last Update: Jun 24, 2015 4:01 pm
RELATED TOPICS