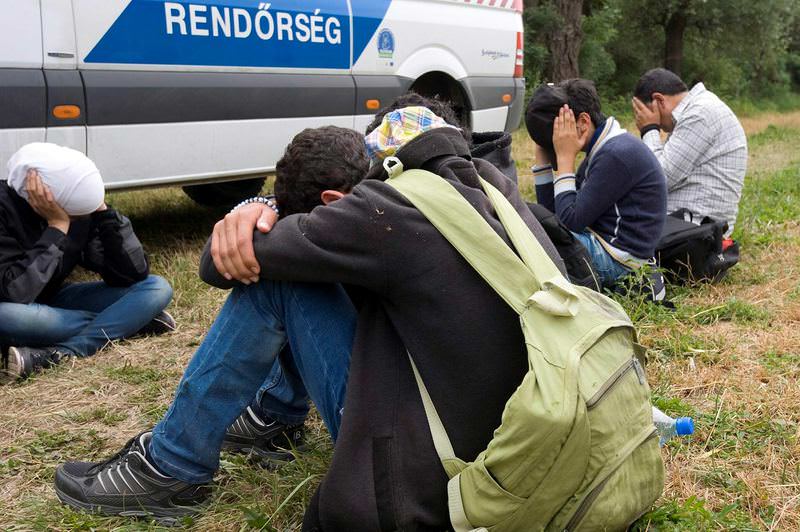 Migrants who were captured on a small island in the Tisza River next to a police van near Serbian border.
by Begüm Tunakan Jun 24, 2015 12:00 am

Long defying EU law and regulations on immigration, Hungary took a step back and reversed its decision to unilaterally suspend the EU rule on the processing of asylum claims after a growing reaction came from Austria

After deciding to opt out of EU regulation on immigration by refusing to take back asylum seekers from EU allies, Hungary took a step back and reversed its decision, saying that the country "was not suspending any rule of the European Union," the foreign affairs ministry said in a statement on Wednesday.

As part of an increasingly extreme reaction to the EU migrant crisis, Hungary stopped accepting asylum seekers from other EU states "indefinitely," defying European authorities. Struggling with a massive flow of illegal migrants from neighboring Serbia, the Hungarian government stated that illegal migrants residing in Austria or other member states should be sent back to where they first entered the EU. Such a move is considered a violation of the EU's Dublin Regulation, as the European Commission urged the Hungarian government to make "an immediate clarification" over the suspension of a key asylum rule. Austria reacted to Hungary's anti-migrant decision, calling it "unacceptable."

"Hungary's asylum system is overburdened, with the largest workload among the member states of the EU affected by illegal migration. Hungary is taking a share in the management of the situation caused by illegal migration beyond its means," Interior Minister Sándor Pintér said in a press release on June 23.

"Until the available capacity in Hungary is enlarged in consequence of pending measures, Hungary will not accept Dublin transfers. In the spirit of EU solidarity, Hungary has asked the member states of the Dublin system to cancel their pre-planned transfers and not to plan new transfers for the time being," the statement added.

Under the Dublin Regulation, which entered into force in July 2013, a member state can be held responsible only when the applicant first lodged his or her application for international protection, as stated in Article 7. As some EU countries -- Austria, Germany and the Czech Republic -- can return asylum seekers to Hungary to process their application, Hungarian authorities stated that Hungary is not the first country for asylum seekers as "an asylum-seeker coming from Syria or Afghanistan filing an application in Hungary must have crossed the borders of at least four states, likewise illegally, before submitting his or her application to the Hungarian immigration authority." However, according to the Article 18 of the Dublin Regulation, EU member states are obliged to "take charge ... of an applicant who has lodged an application in a different member state" and "take back ... an applicant whose application is under examination and who made an application in another member state or who is on the territory of another member state without a residence document."

The number of asylum seekers residing in Hungary hit more than 15,000, according to UN refugee agency (UNHRC) figures released in December 2014. This year, some 13,000 asylum-seekers have arrived in Hungary from Syria, Afghanistan and Iraq, according to the figures released by the UNHRC. This demonstrates that the country has already taken in more refugees than any other EU country. Asylum seekers applying in Hungary mainly originate from Kosovo, Syria and Afghanistan, according to the statistics released by the European Council on Refugees and Exiles (ECRE).

Before Hungary's suspension of its obligations under the Dublin Regulation, the Hungarian government announced on June 17 that it would build an anti-immigrant wall to stem the flow of illegal migrants. Hungarian authorities said that a four-meter-high fence along its border with Serbia would not violate international human rights law. The UN human rights office condemned such a move, saying that placing barriers to entry or forcibly returning asylum-seekers and refugees is a violation of the right to seek asylum.

Hungarian Prime Minister Viktor Orban's government's handling of immigration has come under fire from human rights groups frustrated with a growing expression of xenophobia in the country. Efforts by the Hungarian government to paint refugees as a threat to the country are condemned by rights groups. ECRI also said that migrants are welcomed in Hungary in a report released on June 9 that strongly criticizes widespread racism and xenophobic hate speech promoted by the radical right-wing populist Jobbik party in Hungary. It is mostly believed that Orban's Fidesz (Alliance of Young Democrats) Party publicly adopts a right-wing extremist stance by adopting far-right policies.

Nationalist right-wing leader Orban is well known for his affinity with Russian President Vladimir Putin and his persistent critiques of the EU. He earlier threatened to defy EU law by bringing back the death penalty and building work camps for immigrants that led him to be labeled as a "neo-fascist" by U.S. senator John McCain late last year. European Commission head Jean-Claude Juncker greeted him with "Hello, dictator" at the EU Riga summit held in May 22.
Last Update: Jun 24, 2015 10:03 pm
RELATED TOPICS