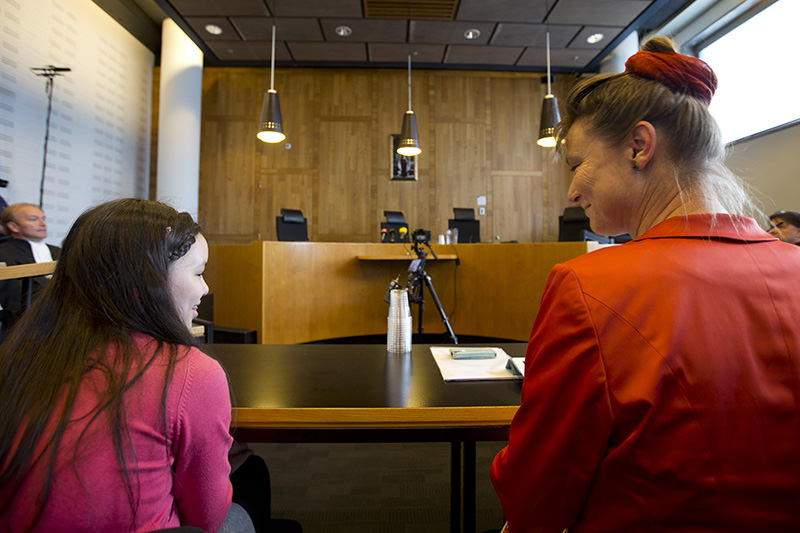 Urgenda Foundation director Marjan Minnesma, right, and 11-year-old fellow plaintiff Anica van Staa, left, wait for the judges to enter court to deliver their verdict in The Hague, Netherlands, Wednesday, June 24, 2015 (AP Photo)
by Daily Sabah with Agencies Jun 24, 2015 12:00 am
A district court on Wednesday ordered the Dutch state to lower greenhouse gas emissions by at least 25 percent by 2020, which is a faster rate than the government is currently targeting.

The ruling by The Hague District Court was a victory for Urgenda Foundation, an environmental group which filed the lawsuit on behalf of nearly 900 Dutch individuals. It could lay the foundations for similar cases around the world, said Marjan Minnesma, the director of the organization.

The plaintiffs argued and the court agreed that the government has a legal obligation to protect its people against looming dangers, including the effects of climate change on this low-lying country, much of which is below sea level and vulnerable to rising sea levels caused by global warming.

"This is a great victory the judge said exactly what we wanted and had the courage and wisdom to say to the government 'you have a duty of care toward your citizens," Minnesma added.

"The parties agree that the severity and scope of the climate problem make it necessary to take measures to reduce greenhouse gas emissions," a summary of the ruling said.

Based on current government policy, the Netherlands will achieve a reduction of 17 percent at most in 2020, which is below the norm of 25-40 percent for developed countries, it said.
Last Update: Jun 24, 2015 1:05 pm
RELATED TOPICS