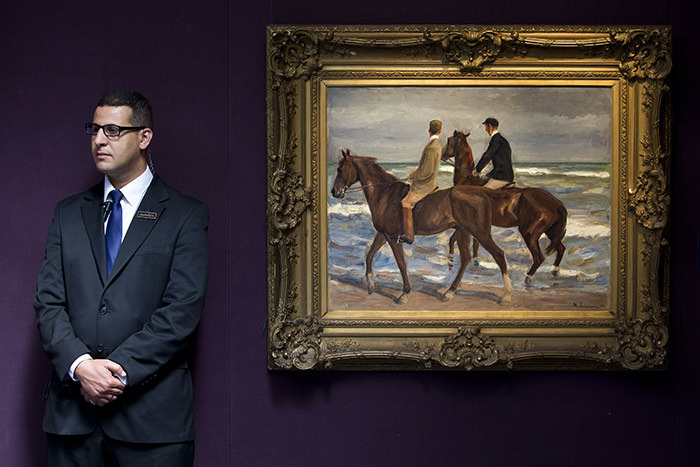 'Two Riders on a Beach' by German artist Max Liebermann painted in 1901 (AFP Photo)
by Jun 25, 2015 12:00 am
A Max Liebermann oil painting confiscated from its Jewish industrialist owner by the Nazis was auctioned off by Sotheby's in London late Wednesday for 1.9 million pounds (3 million dollars).

The German Impressionist painting, Two Riders on the Beach, had been estimated to fetch 870,000 dollars.

It was returned last month to the heirs of David Friedmann, a brick factory owner who was forced to sign over his estate to a Nazi general before World War II.

The 1901 artwork was discovered in 2012 as part of a collection hoarded for decades by Cornelius Gurlitt, the son of a Nazi-era art dealer who died last May.

Wednesday's auction also included Portrait of Gertrud Loew by Gustav Klimt, which was lost to its Jewish owners as they were fleeing Nazi persecution in 1939. It sold for 39 million dollars.

Its sale went ahead as the result of a settlement between the heirs of the painting's subject and the Klimt Foundation.
Last Update: Jun 25, 2015 6:01 pm
RELATED TOPICS