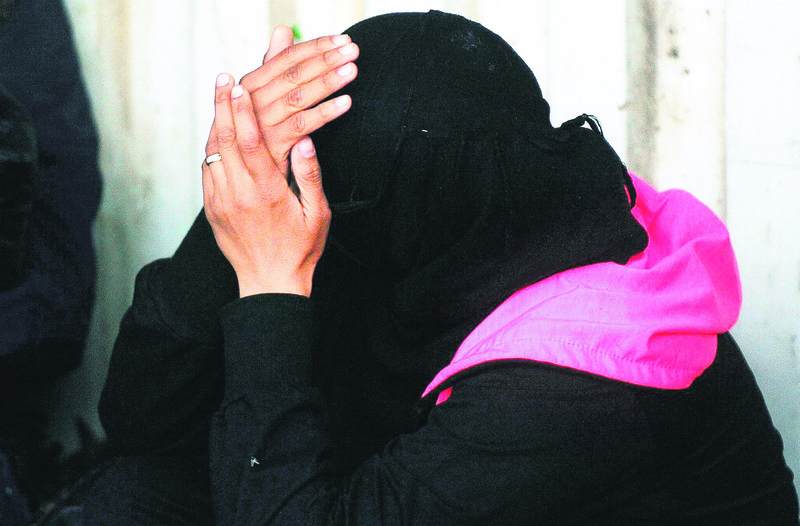 A woman, avoiding showing her face, in Serbia is waiting for a train to reach Western Europe.
by Daily Sabah Jul 01, 2015 12:00 am

Even though global attention is mostly focused on the Mediterranean crisis, it constitutes only a small part of the global refugee crisis, as developing countries are home to 86 percent of the total number of refugees, the UNHCR reports

As the world's attention has primarily focused on the EU's response to the Mediterranean refugee crisis, it only reflects a small part of the global crisis, the U.N. High Commissioner for Refugees (UNHCR) said. In a UNHCR report entitled "The sea route to Europe: The Mediterranean passage in the age of refugees," the refugee agency points out that Turkey, Pakistan and Lebanon have become the top three countries home to increasing numbers of refugees who face persecution and violence.

Turkey is the country taking in the most refugees worldwide for the first time with some 1.59 million, followed by Pakistan with 1.51 million and Lebanon with 1.15 million. In a world of displacement where nearly 60 million people have been forced to flee from human rights violations in their home countries, EU countries are home to a relatively small share of the total number of displaced people. A UNHRC report titled "Global Trends 2014, World at War," said that "59.5 million people worldwide were forcibly displaced at the end of 2014, as a result of persecution, conflict and human rights violations, the highest level on record. That was 8.3 million people more than at the end of 2013: the biggest annual increase ever in a single year. 19.5 million of those people were refugees," and added that "[a]t the end of 2014, the world's top refugee host was Turkey, followed by Pakistan, Lebanon, Iran, Ethiopia and Jordan. Lebanon hosted by far the largest number of refugees by population, 232 per 1,000 inhabitants."

In Lebanon, over 1.3 million Syrian refugees were registered at the start of 2015. "Syrian refugees born in Lebanon are particularly at risk. A 2014 survey of 5,779 Syrian newborns found that 72 percent do not possess an official birth certificate, raising concerns over the recognition of their nationality by the Syrian authorities," the UNHCR said.

Yemen, as a transit country of mixed migration, has 257,645 registered refugees, 95 percent of whom are Somalis, according to UNHCR figures. Thousands of Somalis risk their lives crossing the Gulf of Aden to reach Yemen in search of safety and protection. Most of them live in the Kharaz refugee camp. Figures released in June show that the camp has been dealing with a dire humanitarian situation due to inadequate food supplies. As a signatory to the 1951 Refugee Convention and its 1967 New York Protocol, the Yemeni government is required to provide land, security and access for refugees to the public health system and education.

In Yemen, more than 250,000 refugees have been caught up in the ongoing conflict in the country, becoming victims of war amid the Saudi-led campaign of heavy airstrikes on Houthi rebels. With the civilian death toll on the rise due to attacks on refugee camps, various international human rights organizations have called for more attention to the humanitarian crisis in the country. The two Saudi-led operations, Operation Decisive Storm followed by "Operation Restore Hope, led to humanitarian emergency situations in the country.

The UNHCR report on the global refugee crisis reveals that "data received from Greece, Italy, Malta and Spain charted a staggering 83 percent increase in refugees and migrants crossing the Mediterranean from January to June – 137,000 compared to 75,000 in the same period last year."

"Europe has a clear responsibility to help those seeking protection from war and persecution," UNHCR Antonio Guterres said. "To deny that responsibility is to threaten the very building blocks of the humanitarian system Europe worked so hard to build. European countries must shoulder their fair share in responding to the refugee crisis, at home and abroad."
Last Update: Jul 01, 2015 7:58 pm
RELATED TOPICS