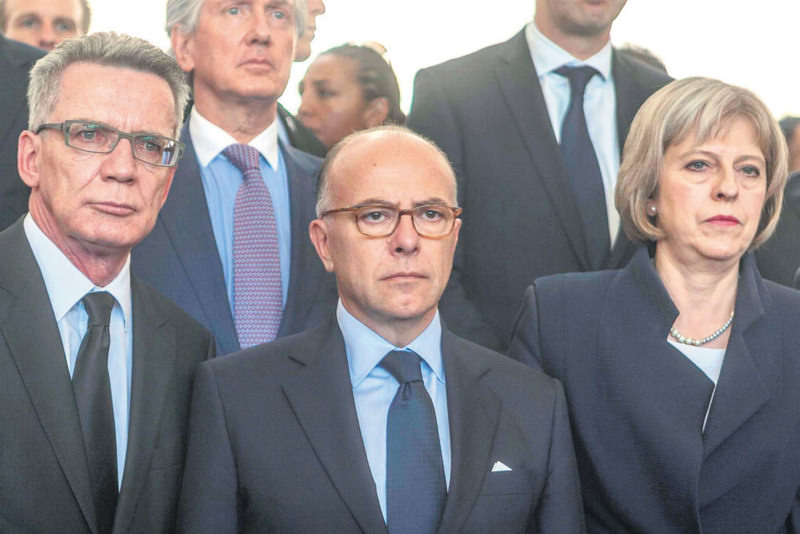 While European countries struggle to address the mass influx of migrants, France and the U.K. have stepped up action to dissuade refugees hiding in trucks from crossing the English Channel

Amid the escalating migrant crisis in Europe, France and the U.K. agreed on Thursday to step up efforts for improved border control around the train line at the Coquelles and Calais ferry port. The move came at a time when European countries have tried to find a common policy to address the mass influx of migrants. The strict border control measures will discourage migrants from Africa and the Middle East trying to stow away on vehicles crossing the Channel Tunnel (Chunnel) between the two countries.

The U.K. also vowed to increase its funding to address the migrants camped out around the northern French port of Calais who are trying to cross the channel. However, no precise figures were given, with the French government saying the details were still being discussed. France and the U.K. signed an agreement last September to create a fund of 5 million euros per year to help Calais cope with the influx of migrants. The money was supposed to go to reinforcing security around the port and access to the Chunnel.

The move was agreed on after many of the some 3,000 migrants camping around the northern French port of Calais this week sought to take advantage of traffic jams caused by a French ferry workers strike to hide in stationary trucks. Calais is one of the front lines in a wider immigration crisis in which European countries are struggling to agree among themselves how to address the growing numbers of migrants fleeing conflict or poverty. "Given the worsening migratory crisis in the Mediterranean and its repercussions in Calais ... the [we have] decided to boost cooperation, notably by topping up the intervention fund," said a joint statement by British Home Secretary Theresa May and her French counterpart Bernard Cazeneuve after talks in Paris. They said the extra resources would allow new measures aimed at preventing migrants from gaining access to the Calais port premises from the beach and to securitize the Chunnel. "Moreover, joint information campaigns aimed at explaining to migrants the realities of the British asylum and welfare system, so as to dissuade flows of migrants to the Calais region, will be pursued and stepped up."

The U.K. earlier refused to participate in rescue missions to save migrants attempting the dangerous sea crossing. The refusal came on the basis that such missions would create a "pull factor" for illegal immigration while encouraging more migrants to leave their home countries to live with better life conditions that the U.K. offers. The political debate in the U.K. over immigration policy has become gradually heated as Prime Minister David Cameron and other right-wing party leaders have hardened their stances on the issue. Immigration to the U.K. from other countries in the EU has been a sensitive issue as well. There has been growing concern over the increasing number of immigrants living in the country, which has led to an increase in votes for the anti-EU and anti-immigration U.K. Independence Party (UKIP) in the recent May election.

In a bid to issue a solid response to a global refugee crisis, European leaders agreed to a voluntary scheme aimed at relocating 40,000 migrants arriving in Italy and Greece among the 28-nation EU bloc to ease the load on the two southern European nations, and resettling an additional 20,000 refugees mainly coming from Syria and Iraq. However, only 40,000 people waiting in the two countries will be relocated to other EU countries while more than 130,000 people have arrived in Greece and Italy over the past six months. The proposal exposed sharp differences between Mediterranean states, notably Italy, which have borne the brunt of the growing numbers of refugees and migrants, and poorer ex-Communist countries in the east that fear costs and disruption of EU proposals that will force them to take in a share of those in transit. So far, European countries have been paralyzed when it comes to the migration crisis.
Last Update: Jul 03, 2015 11:01 pm
RELATED TOPICS