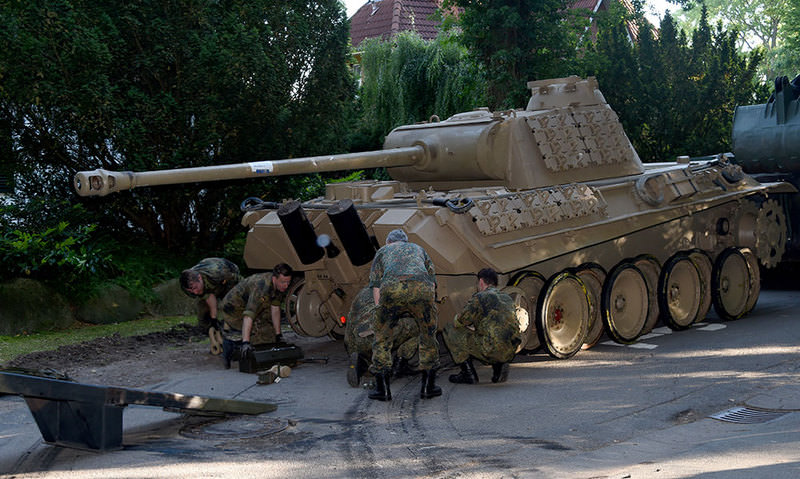 by Associated Press Jul 03, 2015 12:00 am
Authorities seized a 45-ton Panther tank, a flak cannon and multiple other World War II-era military weapons in a raid on a 78-year-old collector's home in northern Germany, prosecutors said Friday.

Kiel prosecutor Birgit Hess said the collector, whose name she would not release for privacy reasons, is being investigated for possibly violating German weapons laws but remains free while the probe is ongoing.

In the search Wednesday and Thursday investigators also seized a torpedo and multiple other military items in addition to the Panzer V "Panther" tank and the 88mm flak gun, Hess told The Associated Press. German military engineers were called in to haul the tank out of the underground garage of the house in Kitzeberg, near Kiel.

The collector's attorney, Peter Gramsch, told the dpa news agency all the items were properly demilitarized and registered.

Hess said that she did not know whether the main gun on the tank could fire, but it didn't appear to be properly registered and an independent expert said it wasn't properly demilitarized.

The collector came to authorities' attention in an investigation into black market Nazi-era art that in May turned up two massive bronze horse statues that once stood in front of Adolf Hitler's chancellery. Those were in the possession of another man, who maintains he is the rightful owner.

The tank owner has made no secret of his collection, openly talking about the Panther and other items in media reports following the May revelation of the art investigation.

Neighbor Kristin Schroeder told the local Kieler Nachrichten newspaper that the man had even fired up the tank during the particularly bad winter of 1978-79 and helped plow others' snow.

"It was well known, at least to all the older Kitzebergers, that he had a tank," Schroeder said.