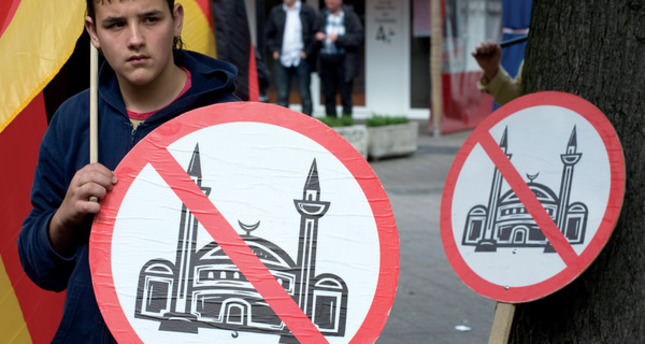 by Anadolu Agency Jul 03, 2015 12:00 am
Islamophobic acts in France have increased by 23.5 percent in the first six months of 2015 compared with the same period last year, a French nongovernmental organization has said in a new report.

"Attacks against mosques, death threats against veiled women, school kids humiliated by their teachers, female students prohibited from wearing long skirts, religious profiling of Muslim children, propagation of hate speeches and even declarations of war on Muslims whom are portrayed as a fifth column... the consequences have been and still are dire for Muslims," the report said.

Moreover, physical assaults increased by 500 percent and verbal attacks by 100 percent during the initial months of 2015, the report said, adding that women were among the first victims of Islamophobia.

"Discrimination and violence against adults are now joined by the humiliations inflicted on numerous Muslim children that have been blamed for the terrorist attacks," it said.

However, few people were making complaints about the Islamophobic acts because of apparently two main reasons: "Agents refuse to take my complaint," and secondly: "Perpetrators are rarely convicted and if they are, justice is very lenient."

The report also referred to a recent dialogue between Muslim representatives and the French Ministry of Interior, noting that the ministry had "urged police officials to accept complaints from victims of Islamophobia".

After the deadly Charlie Hebdo attacks in France last January, Islamophobia is believed to have increased manifolds in France, which is home to nearly five million Muslims, most of whom are from North Africa.
Last Update: Jul 03, 2015 11:33 pm
RELATED TOPICS