Crying Greek pensioner: ‘I cannot stand to see my country in this distress’ 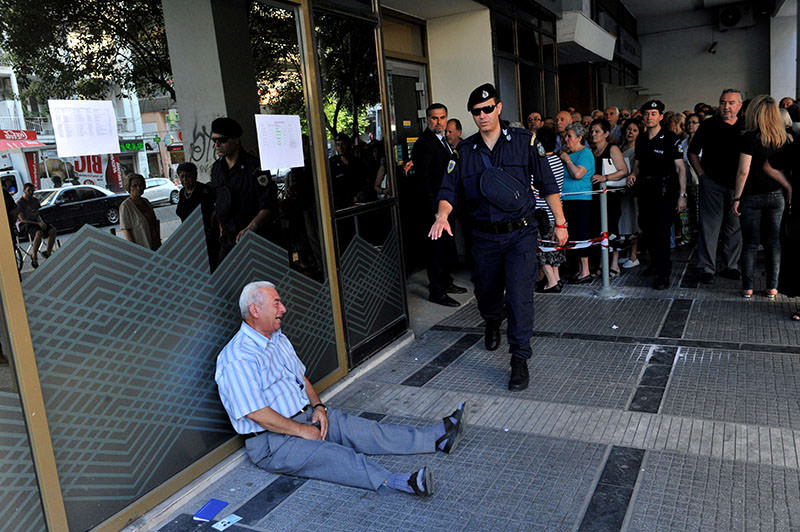 A July 3, 2015 shows Giorgos Chatzifotiadis, sitting on the ground crying outside a national bank branch, as pensioners queue to withdraw their pensions, with a limit of 120 euros, in Thessaloniki (AFP Photo)
by Jul 04, 2015 12:00 am
Retiree Giorgos Chatzifotiadis had queued up at three banks in Greece's second city of Thessaloniki on Friday in the hope of withdrawing a pension on behalf of his wife, but all in vain.

When he was told at the fourth that he could not withdraw his 120 euros ($133), it was all too much and he collapsed in tears.

The 77-year-old told AFP that he had broken down because he "cannot stand to see my country in this distress".

"That's why I feel so beaten, more than for my own personal problems," Chatzifotiadis said.

The image of him sitting outside the bank, openly crying in despair with his savings book and identity card on the floor, was captured by an AFP photographer illustrating how ordinary Greeks are suffering during the country's debt crisis.

Athens had imposed capital controls and shut all banks since Monday to stem a hemorrhage of cash, but on Wednesday allowed some branches to reopen for three days so retirees who have no bank cards could withdraw their pensions -- capped at 120 euros.

Recounting how he had gone from bank to bank in a futile attempt to collect his wife's pension, Chatzifotiadis said when he was told at the fourth "that I could not get the money, I just collapsed".

Both he and his wife, like many Greeks in the north of the country, had spent several years in Germany where he "worked very hard" in a coal mine and later a foundry.

And it is from Berlin, which is being blamed by many in Greece for its hardline stance in demanding the government impose more austerity measures for fresh international aid, that Chatzifotiadis is receiving his wife's pension.

"I see my fellow citizens begging for a few cents to buy bread. I see more and more suicides. I am a sensitive person. I cannot stand to see my country in this situation," he said.

"Europe and Greece have made mistakes. We must find a solution," he added.

But Chatzifotiadis feels he can do little to change the situation, and he is not even sure if he would be able to vote at Sunday's referendum on whether to accept international creditors' bailout conditions.

European leaders have warned that a 'No' vote would also mean no to the eurozone.

Pointing out that the polling station is 80 kilometers (50 miles) away, Chatzifotiadis said: "I have no money to go there, unless perhaps if my children would take me in their car."
Last Update: Jul 04, 2015 2:38 pm
RELATED TOPICS