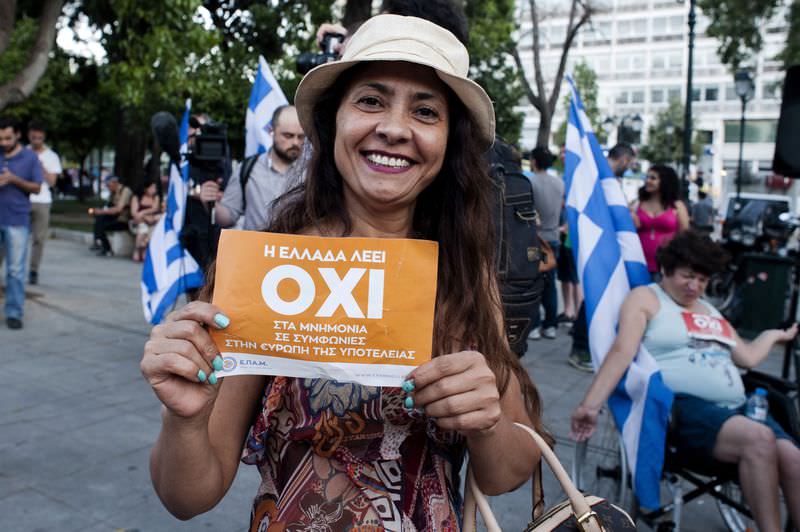 A woman celebrates at Klafthmonos Square in Athens on July 5, 2015 after the first exit-polls of the Greek referendum. (AFP Photo)
by Daily Sabah with Agencies Jul 05, 2015 12:00 am

As the 'no' supporters started to celebrate, Grece's Finance Minister Yanis Varoufakis gave a statement to the media in Athens and said that "Greece's big no is a big yes to to a democratic Europe, and it strengthens the protection that the country offers its people."

He also said that the results send a strong message: 'no to cuts, yes to reforms.'

Greek conservative opposition leader Antonis Samaras announced his resignation late on Sunday after the 'no' votes were announced as a definite 61 per cent. In a televised adress, the New Democracy chief said that "I understand that our great movement needs a new start. From today I am stepping down from the leadership."

On the same lines as Samaras, Belgian Finance Minister Johan Van Overtveldt also reacted negatively to the 'no' vote and said a 'no' to EU bailout deal will "complicate matters" and further added that the eurogroup of 19 finance ministers can discuss measures again "that can put the Greek economy back on track and give the Greeks a perspective for the future." He also insisted that the door remains open to resume talks with Greek government "literally, within hours."

Greek PM Alexis Tsipras also commented on the referendum results and his chief negotiator also reiterated today that a deal will be struck with Greece's creditors within 48 hours of the ''no'' vote on terms of Europe's latest bailout offer. After 75 per cent of the ballot boxes had been opened, Prime Minister Alexis Tsipras said: "We have proved democracy cannot be blackmailed."

He added that the mandate the referendum has given him was not one of "rupture with Europe", while conceding that there were "no easy solutions" to Athens' debt crisis.

Before the referendum, the 'no' vote was shown as set to win by 61 percent in the official projection released by the Greek Interior Ministry.

Three opinions polls, however, had showed a much tighter race with a three to four percentage point difference between both sides.

The referendum asked Greek citizens to vote "Yes" or "No" on proposals to raise taxes and cut spending from Greece's creditors -- the European Commission, the European Central Bank and the International Monetary Fund, also dubbed the troika.

The past week saw the country's bailout program expire on Tuesday when it defaulted on a 1.5 billion euro ($1.7 billion) repayment as banks closed their doors and put limits on cash withdrawals.