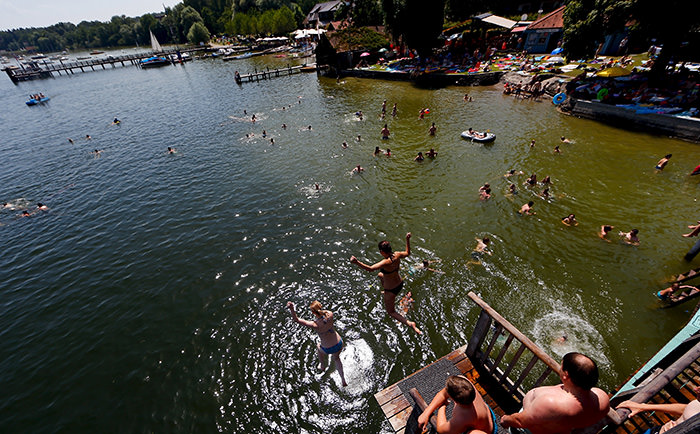 Youths jump into the cool waters of the Ammersee lake in Utting, near Munich, July 5, 2015 (Reuters Photo)
by Jul 05, 2015 12:00 am
As Germany sweltered in temperatures near 40 degrees, at least 12 people were reported drowned on Sunday in swimming accidents across the country, with several others still missing.

There were children and young people among the dead: in Bavaria a 4-year-old drowned in a quarry pond, while a 6-year-old was carried away by the current after swimming in the Rhine in Cologne.

In the western town of Siegen, a boy drowned in a natural outdoor pool; there were also reports of drownings in the states of Baden-Wuerttemberg, Hesse, Hamburg and Brandenburg.

The German Life-savers' Society (DLRG) said 392 people drowned in Germany last year, mostly in rivers and lakes, so they recommend that people only swim where there are lifeguards.

The weekend was the hottest of the year, but still short of the 40.2-degree record last reached in 2003.

The Rhineland town of Bad Duerkheim registered the country's highest temperature of the heatwave with 39.2 degrees, the German Meteorological Office reported.

Storms had resulted in two injuries on Sunday, while trees crashed onto roads and downpours led to flooded cellars.

Caravans heading to the coast caused traffic delays on the roads, as did heat damage to the motorways and rail-tracks.

Police received several calls about parents and dog-owners leaving their children and pets in parked cars to go shopping. "It is unfathomable," one police officer in Thuringia said. Offenders were called back to their cars by megaphone.

A cold front was expected to lower temperatures in Germany on Monday before the mercury climbs back up over 30 on Tuesday. The Met Office has warned of heavy storms in the west of the country and even isolated tornadoes.
Last Update: Jul 05, 2015 6:14 pm
RELATED TOPICS