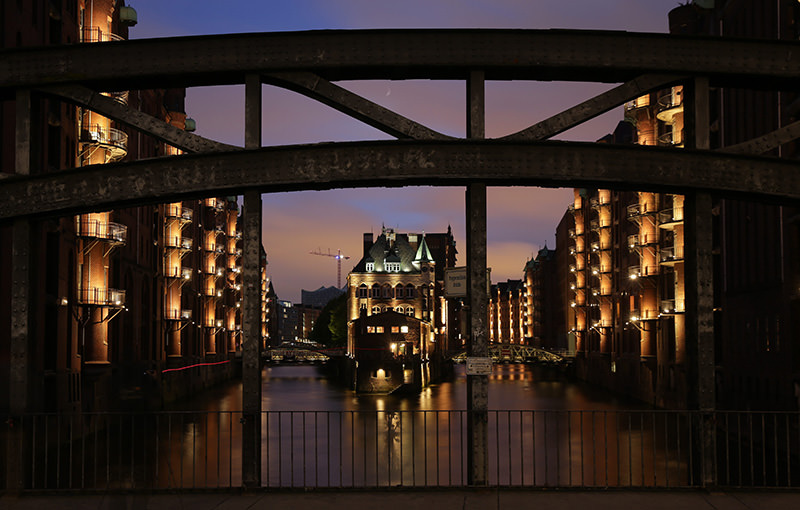 An archive picture made available 05 July 2015 of the tender sickle of the half moon (topb, C) cast against a colourful evening sky above the illuminated old warehouse district in Hamburg, Germany (EPA Photo)
by Jul 05, 2015 12:00 am
The UN cultural organization on Sunday named Hamburg's warehouse district, or Speicherstadt, and the merchant Kontorhaus district as a World Heritage Site.

The UN Educational, Scientific and Cultural Organization (UNESCO) made the decision at its annual conference, this year hosted by the German city of Bonn.

The Speicherstadt was built in three stages on a group of islands in the river Elbe between 1885 and 1927. The brick warehouses are neo-Gothic in style. The buildings are connected by roads, canals and bridges.

The Kontorhaus district was the first dedicated office district on the continent of Europe, UNESCO said.

"It is characterized by a high degree of stylistic consistency, and was executed in the 1920s, 30s and 50s with virtually no change resulting from the Second World War.

"Particularly good examples of the style are the Chilehaus, Messberghof and Sprinkenhof, which are among the most significant of all the architectural heritage of that period," it said.

A second German nomination, the late Romanesque-Gothic cathedral in the Saxony-Anhalt city of Naumburg, was not successful, but was given the right to apply again.

There were successful nominations for Israel, Scotland and the United States.

Israel's Beth She'arim necropolis in the Lower Galilee region was a winner. "Beth She'arim became a prominent Jewish cultural centre when the Sanhedrin, the religious-social leadership body of the Jews, moved there following the destruction of Jerusalem by the Romans in 70 CE," UNESCO said.

Also added to the heritage list was Scotland's iron and steel Forth Road Bridge, which UNESCO described as a "world wonder of its age," a "Victorian engineering marvel" and "arguably the world's greatest and most famous cantilever bridge."

The US site, the San Antonio Franciscan Missions, "are a remarkable concentration of surviving structures that are a spectacular representation of the Spanish colonial influence in the New World," the UN agency said.