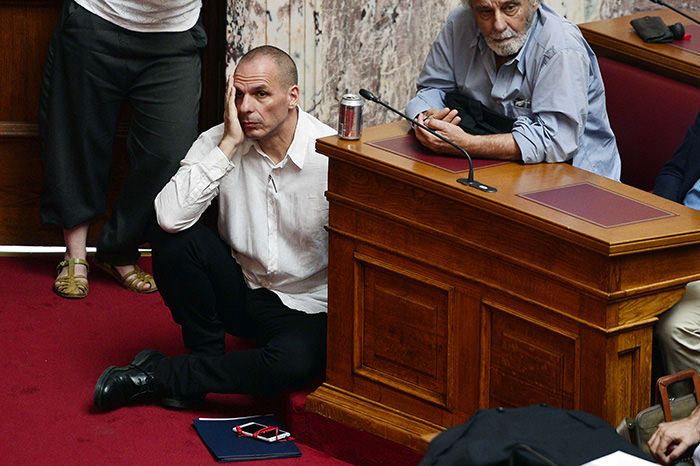 |AFP Photo
by Compiled from Wire Services Jul 06, 2015 12:00 am
Greece's chief bailout negotiator Euclid Tsakalotos on Monday was named as finance minister to replace Yanis Varoufakis, who unexpectedly resigned earlier in the day.

Tsakalotos, 55, is an economist turned politician who has been a Syriza lawmaker since 2012.

He will travel to Brussels with Prime Minister Alexis Tsipras on Tuesday to present new proposals to the Eurogroup on handling Greece's financial crisis.

His resignation came after Greeks delivered a resounding 'No' to the conditions of a rescue package with international creditors, casting the country into uncharted waters and a possible exit from Europe's common currency.

With relations already frosty, Varoufakis infuriated Greece's European partners last week when he accused creditors of using "terrorism" against the Greek people to intimidate them into accepting more austerity.

In a statement, Varoufakis said he had been "made aware" that some members of the euro zone considered him unwelcome at meetings of finance ministers, "an idea the prime minister judged to be potentially helpful to him in reaching an agreement".

"For this reason I am leaving the ministry of finance today."

"I consider it my duty to help Alexis Tsipras exploit, as he sees fit, the capital that the Greek people granted us through yesterday's referendum," Varoufakis said. "And I shall wear the creditors' loathing with pride."
Last Update: Jul 06, 2015 6:30 pm
RELATED TOPICS