Hungary to tighten asylum rules amid criticism from EU, UN 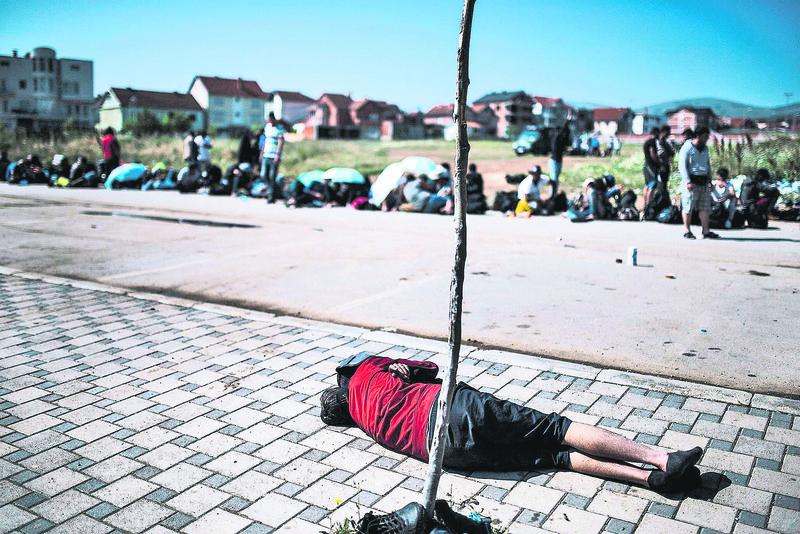 Hundreds of migrants wait to be accepted by Hungarian authorities near Serbian border.
by Daily Sabah with Wires Jul 06, 2015 12:00 am

In a bid to defy EU law and regulation on immigration, Hungary passed a law to tighten asylum rules in order to stem the flow of illegal migrants. The U.N. and EU criticized the bill saying that it would hurt refugees in the country

Despite growing opposition to strict asylum rules, Hungary's parliament passed a legislation on Monday that tightens its asylum rules, providing the legal framework for the erection of a fence along the country's southern border with Serbia to stem the flow of illegal migrants. The move came amid a growing migrant crisis that has shaken the EU bloc countries. The legislation shortens the time frame for screening asylum claims and will allow Budapest to reject claims from migrants who are on their journey from Syria, Afghanistan or Iraq and have passed through safe countries. The United Nations and the Council of Europe have criticized the bill, saying it would weaken refugee protection in Hungary.

Before introducing the changes to the country's asylum system, aid organizations warned the Hungarian government of potential "fatal consequences" for refugees fleeing war. In an open letter to Hungarian lawmakers, the UNHCR regional representative in Central Europe said that while every country had the right to defend its borders and protect its citizens, the planned amendments "would make it impossible for people fleeing persecution to access international protection in Hungary." "The proposed measures will bring legal and physical barriers, which could have fatal consequences," Montserrat Feixas Vihe said, adding that the new laws failed "moral and basic humanitarian standards" and were not in line with Hungary's duties under international treaties.

Last week, Hungary took a step back and reversed its decision to unilaterally suspend EU rule on the processing of asylum claims. Struggling with a massive flow of illegal migrants from neighboring Serbia, the Hungarian government stated that illegal migrants residing in Austria or other member states should be sent back to where they first entered the EU. Such a move is considered a violation of the EU's Dublin Regulation.

The Hungarian government announced on June 17 that it would build an anti-immigrant wall to stem the flow of illegal migrants. Hungarian authorities said that a four-meter-high fence along its border with Serbia would not violate international human rights law. The U.N. human rights office condemned such a move, saying that placing barriers to entry or forcibly returning asylum-seekers and refugees is a violation of the right to seek asylum.

Hungarian Prime Minister Viktor Orban's government's handling of immigration has come under fire from human rights groups frustrated with a growing expression of xenophobia in the country. Efforts by the Hungarian government to paint refugees as a threat to the country are condemned by rights groups. ECRI also said that migrants are welcomed in Hungary in a report released on June 9 that strongly criticizes widespread racism and xenophobic hate speech promoted by the radical right-wing populist Jobbik party in Hungary. It is mostly believed that Orban's Fidesz (Alliance of Young Democrats) Party publicly adopts a right-wing extremist stance by adopting far-right policies. Orban staunchly opposes immigration and said last year that Europe's 10 million Roma should be trained to do the low-skill jobs often done by immigrants.
Last Update: Jul 06, 2015 7:29 pm
RELATED TOPICS