Merkel in Paris for critical Greece meeting with Hollande 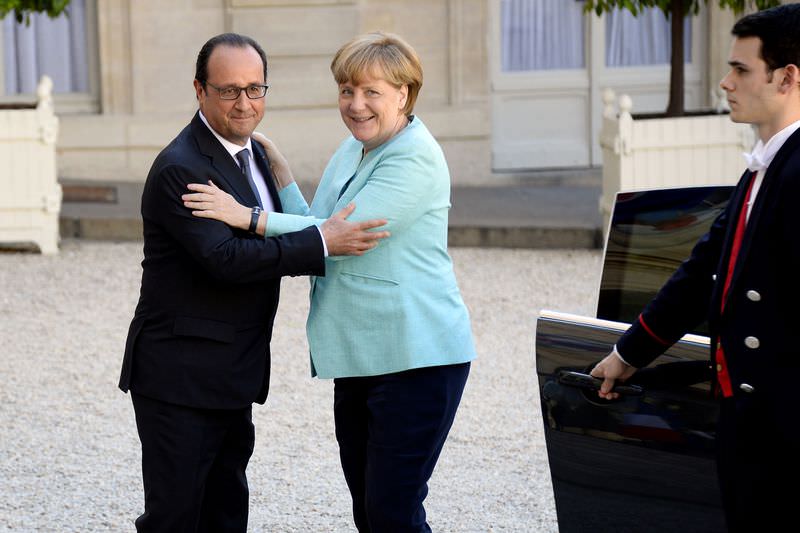 | AP Photo
by Daily Sabah with Agencies Jul 06, 2015 12:00 am
German Chancellor Angela Merkel and the French President Francois Hollande met in Paris on Mondayto discuss possible solutions for the Greek crisis. Both leaders urged Greece to give 'serious' and 'credible' proposals after the Greeks overwhelmingly voted 'no' at Sunday's referendum.


Hollande gave Merkel a friendly greeting in the courtyard of Elysee Palace in Paris before the two headed for the meeting, which comes a day ahead of an emergency summit of the Eurozone's 19 leaders on Greece.

Both of the leaders stated that they respected Greece's vote to reject the creditor's terms. Hollande said in the meeting that France's 'doors are open for discussions' with Greece.He also emphasized the fact that "time is running out," while Merkel stressed the importance of 'taking responsibility' and urged Greece-Alexis Tsipras in particular- to come up with proposals to be submitted at Tuesday's Eurozone summit.

After the meeting, the German Chancellor said that "The prior conditions for entering into new negotiations on a concrete programme of the European Stability Mechanism have not yet been met," and added " that is why we are now waiting for very precise proposals from the Greek prime minister, a programme that will allow Greece to return to prosperity."

Also on late Monday, European Central Bank which has been keeping Greek lenders afloat, announced that it will keep Greece's pre-agreed Emergency Liquidity Assistance at same level- determined as about 90 billion euros (100 billion dollars) on June 26, prior to the Greek referendum.

"The governing council is closely monitoring the situation in financial markets and the potential implications for the monetary policy stance and for the balance of risks to price stability in the euro area," the ECB said in a statement issued after a meeting in Frankfurt.

Premier Tsipras is to unveil his government's proposals on Tuesday at a hastily-arranged emergency summit of the 19 eurozone countries in Brussels.

With Greece's economy gasping for air, the authorities extended an eight-day bank closure until Thursday amid fears cash machines in the country were running dry.

France has appeared more conciliatory than Germany toward Greece over the past few months of protracted bailout discussions.


The Franco-German duo had arranged the meeting on late Sunday after the 'no' vote had pretty much declared a clear win.
Last Update: Jul 07, 2015 2:08 am
RELATED TOPICS