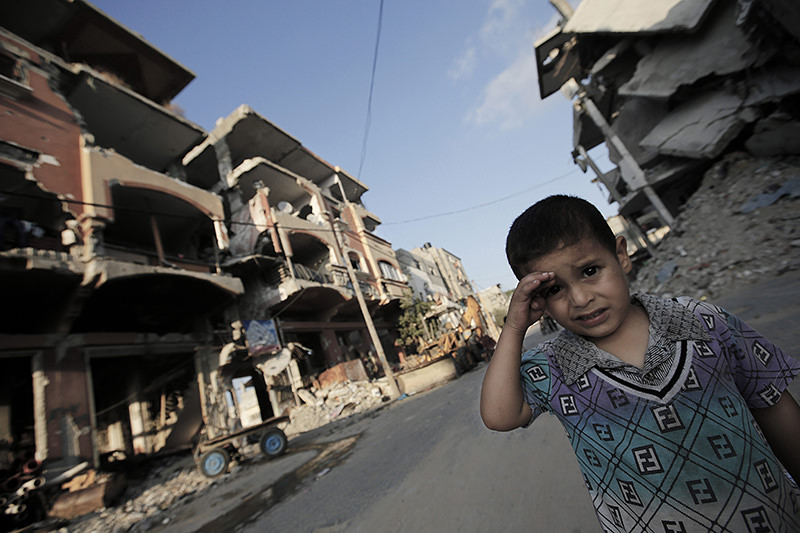 Four-year-old Alaa Al Kafarneh looks on as he plays amid destroyed houses damaged during the 2014 Israel-Gaza conflict, nearly a year later, in Beit Hanun, northern Gaza Strip, 03 July 2015 (EPA Photo)
by Nurbanu Kızıl Jul 06, 2015 12:00 am
Protestors have reportedly shut down factories in England producing drones that are exported to Israel, on the anniversary of Israel's deadly military operation 'Protective Edge' which killed over 2,200 Palestinians and wounded over 11,000.

According to reports, protestors are demonstrating against Israel's unlawful actions in Palestine, as part of an initiative called 'Block the factory,' which is carried out in three locations.

The UAV Engines Ltd. factory, which is owned by Elbit Systems, the biggest arms company of Israel was shut due to protests early Monday, when protestors reportedly blocked the road and entrance to the factory.

Other branches of Elbit's factories, including the ones in Tamworth and Kent were also occupied by activists, who accused the company of complying with Israel's war crimes in Gaza.

Elbit's factories have reportedly faced such protests before, which cost the company over £100,000.

A report released in June by an independent U.N. commission of inquiry on Israeli aggression on the Gaza Strip last summer concluded that Israel deliberately targeted civilians.

Israel faces charges that it potentially breached international law in multiple areas of the conduct of its war, including the targeting of residential homes with precision, the excessive use of artillery in civilian areas and the loosening of rules of engagement.

According to a UNICEF report, the 52-day conflict in Gaza last year resulted in the killing of 564 children, while it was noted that there are currently 2,956 Palestinians who struggle with trauma and life-long disabilities.