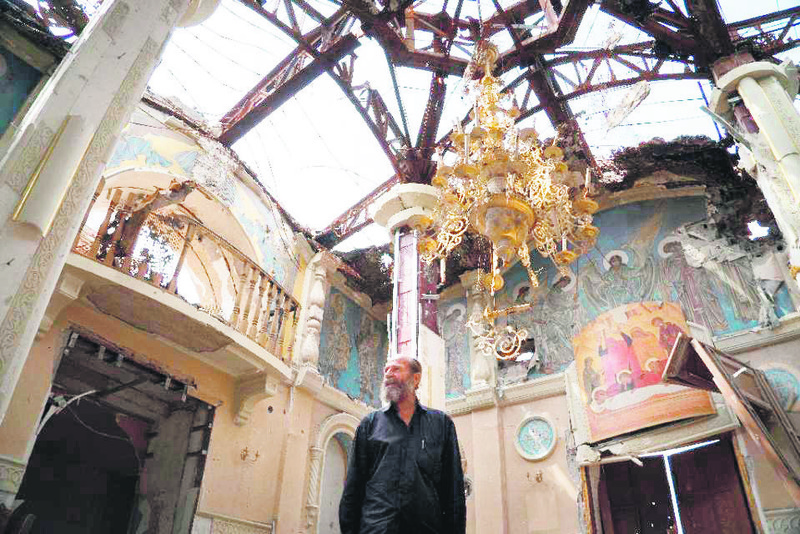 by Jul 10, 2015 12:00 am
Nikolai Borodulya picks his way past tripwires and unexploded mines when he visits his relatives' graves in the cemetery of the ravaged Svyato-Iversky convent near the frontline of east Ukraine's war. "There's a shell sticking out next to their grave," the church elder, who lives nearby, told AFP. The small white-painted convent is a no-go area, its gravestones broken, its walls pockmarked with craters after months of fierce fighting for the neighboring Donetsk airport. Its nuns and priests were forced to leave in the summer of 2014, but services continued for several months after hostilities broke out in the spring. The domed church was taken over by rebels, who used it as a strategic firing position in the battle for the now-ruined airport terminal which they finally claimed in January.

Now Ukrainian forces are stationed only a few kilometers away from the convent in the village of Pisky and fighting rumbles on despite a fragile ceasefire. Borodulya says he can't go there alone, and needs an escort of rebel de-miners from the forces of the self-proclaimed pro-Russian Donetsk People's Republic. "They started shelling the airport on May 26 and shells started ricocheting over here, but they kept on holding services," said Borodulya, holding up an icon that has survived intact. During the battle for the airport, rebel forces used the convent as a fortress, firing at Ukrainian troops from within its walls, leaving the grounds littered with cartridges and boxes used to store shells. "This was a firing position. Look, you can see the airport's tower out of the windows," said pro-Russian rebel sapper Artyom, pointing up at church windows packed with sandbags.

Ukrainian military says the cellar of the convent was used to store ammunition, while up to 100 rebels were based inside the church, including snipers and machine gunners. A loyalist Ukrainian fighter, Valeriy Loginov, said he remembers the church well. "For us, this church was a big problem," he told AFP by telephone. "This was the base for their operation to put pressure on the airport tower." Inside the church, whose walls are painted with frescoes, the rebels set up gun nests to fire on the airport control tower, defended for months by Ukrainian forces who became known as "cyborgs" for their apparent invulnerability.

A smell of incense still hangs in the air, mixed with the smoke from heavy weaponry. Broken grenade launchers are scattered around. But though the church has been abandoned, rebels remains positioned at observation posts around the Donetsk airport and there are regular exchanges of mortar fire between rebels at the airport and Ukrainian forces in Pisky. "The Ukrainians are still nearby, no one drove them away. We'll have to fight again in this place," said the sapper Artyom. Two kilometers (1.2 miles) away, renovations are beginning on another church, dedicated to Saint Ignatius, after it too was damaged in the fighting. "The faithful who aren't afraid come here anyway, up to 30 people gather here. We are doing the restoration thanks to donations," said Borodulya. Tatiana, 65, said she comes often. "Some fighters come in here who are going to the war afterwards, they ask for a blessing," she said. "Ordinary village residents come too, we often read special prayers together for an end to the war."
Last Update: Jul 10, 2015 8:53 pm
RELATED TOPICS