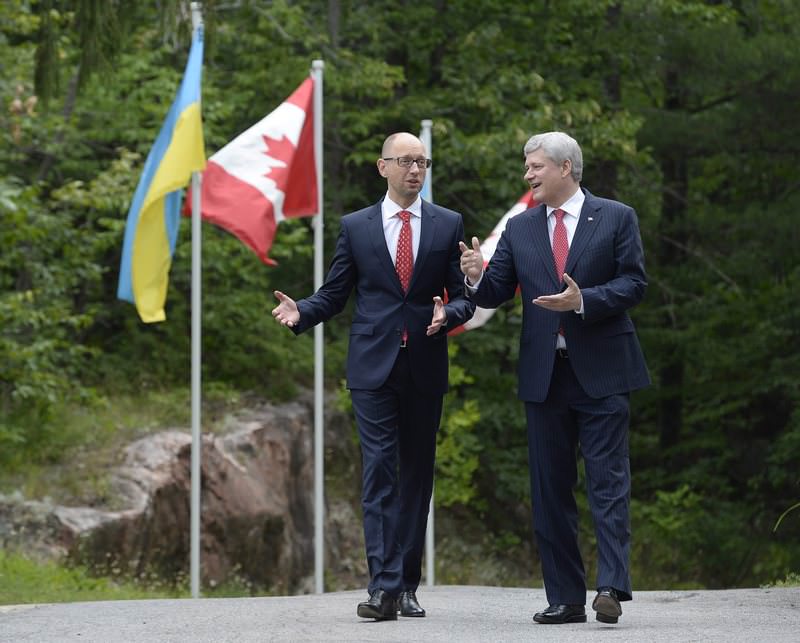 The agreement, which still must be ratified by both nations' parliaments, will be implemented as soon as possible, Harper said in a statement.

With more than a million inhabitants claiming roots in Ukraine, Canada has made multiple supportive moves with Kiev since the 2014 revolution and Russia's annexation of the Crimean Peninsula.

The agreement is expected to grow the Canadian GDP by Can$29.2 million (US$22.9 million) and Ukraine's GDP by Can$18.6 million, according to evaluations by the Canadian government.

"Today's conclusion of the Canada-Ukraine Free Trade Agreement is another milestone in the important relationship between our two countries," Harper said.

Canada will eliminate tariffs on 99 percent of imports from Ukraine and increase exports to Ukraine by Can$41.2 million.

Meanwhile, financially troubled Ukraine will reduce tariffs on 86 percent of Canadian imports and increase exports to Canada by Can$23.7 million, mainly in the textile and metalworking industries.

The Ukrainian economy has taken a nosedive after three years of recession and more than a year of civil war.

Its national debt is expected to reach nearly 94 percent of GDP this year, according to the International Monetary Fund.

The signing culminates negotiations that have been underway since 2009, but were interrupted by the Russian incursion into Crimea.

Ukraine is not on the list of Canada's top 40 trading countries but Taras Zalusky, executive director of the Ukrainian Canadian Congress, said the political symbolic value is impactful and Ukraine as a market will gain in importance. Currently, most of the country's economic output goes to pay its debts.

"You've got a country of 45 million people, one of the largest countries within Europe with a very high literacy rate and a high level of economic potential," Zalusky said. "It used to be the economic engine of the former Soviet Union. So you've got great opportunity and you've got a country who used to rely on Russia as one of its primary trading partners. So now you have opportunity for Canadian companies to partner with Ukrainians in the aerospace sector, agriculture, financial services and oil and gas."

He added that the deal is a "sign of confidence by Canada" that Ukraine can move forward with political and business reforms "all the while being at war with Russia."