Clashes break out at anti-austerity rally in Greece 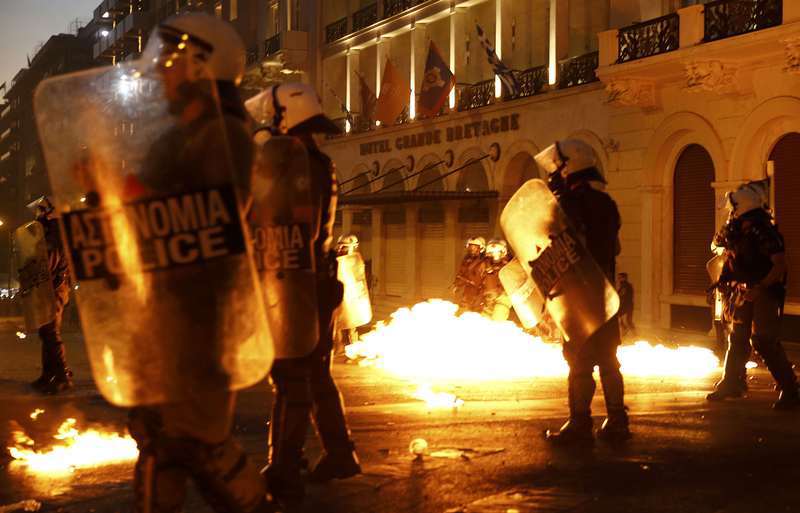 by Jul 15, 2015 12:00 am
Greek anti-establishment protesters threw dozens of petrol bombs at police in front of parliament on Wednesday ahead of a key vote on a bailout deal, in some of the most serious violence in over two years.

Earlier, thousands took to the streets of Athens in a series of otherwise peaceful marches during the day to protest against the new bailout deal that saved Greece from bankruptcy but will impose more reforms on a country already deep in crisis.

Once a common sight in protest marches in Greece, clashes with police had been very rare since the leftist Syriza party came to power in January.

Just before the clashes, protesters marched waving banners reading "Cancel the bailout!" and "No to the policies of the EU, the ECB and the IMF."

Pharmacists pulled down their shutters across Greece and civil servants walked off their jobs in protest in a 24-hour strike against reforms.

Opposition on the streets has so far been limited, however, and an opinion poll published on Tuesday suggested that more than 70 percent of people wanted parliament to approve the bailout.

Lawmakers are due to vote after midnight on the raft of tax hikes and pension reforms that are hard to accept for many in a country where unemployment has jumped above 25 percent and the economy has shrunk by a quarter in the course of two previous bailouts.

"The bailout to be voted today is against the people, it is against the workers. It is by far the most barbaric - even worse than the two previous ones which were also barbaric," 19-year-old protester Dimitris said.

Some protesters had no illusions about what the rallies could achieve. "The demonstration is the appropriate way, we don't expect it will change anything of course," said Pepi Filippidi, 42, a public sector employee. "But what else can we do, put bombs and blow ourselves up?"

Not all are backing the protest rallies, whose turnout pale in comparison to the tens of thousands of the first years of the crisis.

"The measures should be adopted by parliament so that stability can come back," said 30-year-old cook Yannis Zafiriadis, who was waiting to withdraw money at an ATM as protesters marched by.

"We have to give Tsipras the chance to complete the four years we elected him to govern for. Only afterwards should he be judged, on completion."