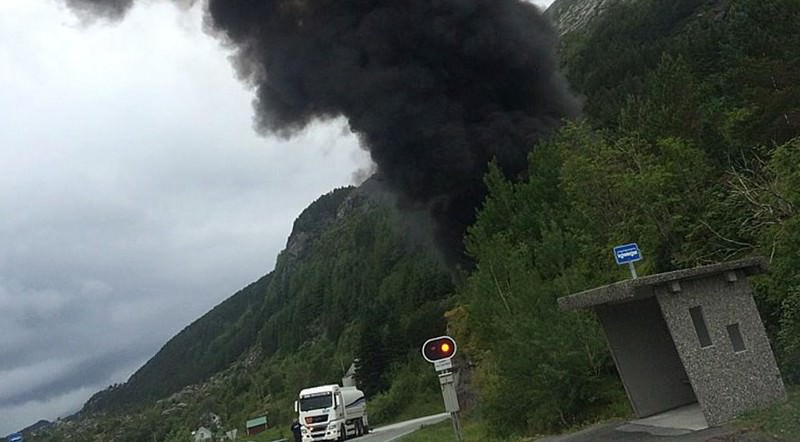 by Associated Press Jul 15, 2015 12:00 am
The trailer of a tanker truck with some 16,500 liters (4,290 gallons) of fuel got loose Wednesday and crashed into a subsea tunnel wall, causing a huge explosion, Norwegian rescue officials said. No one was seriously hurt.

The tunnel has been closed to everyone except firefighters. More than 20 people were evacuated from the tunnel and a nearby house, police spokesman Joern Lasse Refsnes said. He said three people were checked for smoke inhalation at a nearby hospital.

Rescue spokeswoman Magni Brandsoey said the truck driver was able to get out and call a rescue center. It was not clear how the trailer got loose.

Details of the accident were sketchy but truck driver Tore Myrestrand told local newspaper Firda he had problems with the brakes in the deepest part of the tunnel that goes 91 meters (299 feet) below sea level.

He said he rushed to grab an emergency phone in the tunnel to have it closed immediately. He was able to get out in the tractor.

Photos posted on Norwegian media show a huge black billow of smoke in the mountainous area in western Norway.