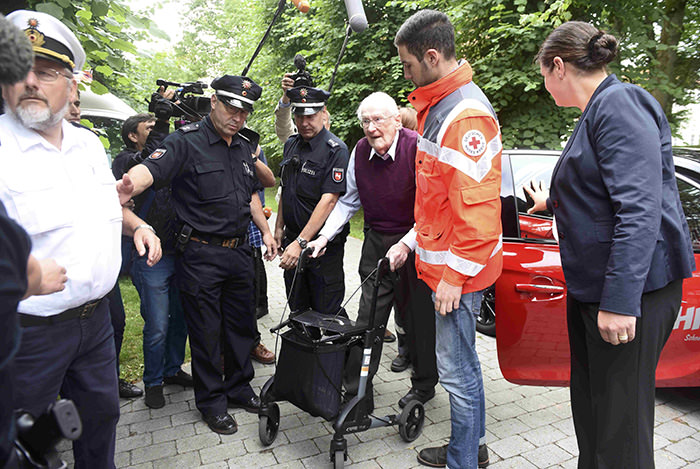 Oskar Groening, defendant and former Nazi SS officer dubbed the ,bookkeeper of Auschwitz, arrives for his trial in Lueneburg, Germany, July 15, 2015 (Reuters Photo)
by Associated Press Jul 15, 2015 12:00 am
A 94-year-old former SS sergeant who served at the Auschwitz death camp has been convicted on 300,000 counts of accessory to murder.

The state court in the northern German city of Lueneburg gave Oskar Groening a four-year sentence.

Groening has testified that he guarded prisoners' baggage after they arrived at Auschwitz and collected money stolen from them. Prosecutors said that amounts to helping the death camp function.

The charges against Groening related to a period between May and July 1944 when hundreds of thousands of Jews from Hungary were brought to the Auschwitz-Birkenau complex in Nazi-occupied Poland. Most were immediately gassed to death.
Last Update: Jul 15, 2015 11:26 am
RELATED TOPICS