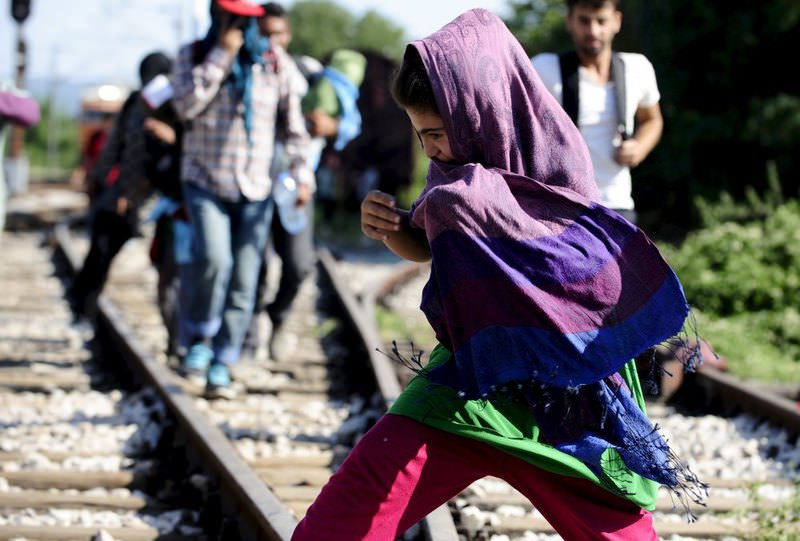 A migrant child runs at Gevgelija train station in Macedonia near the border with Greece.
by Daily Sabah with AFP Jul 21, 2015 12:00 am

As the number of migrants who have fled from violence increases, the 28-country EU bloc again could not agree on how to relocate around 8,000 of 40,000 migrants, falling short of its target

EU ministers could not agree on Monday on how to distribute all 40,000 mostly Syrian and Eritrean migrants from overstretched Italy and Greece. They agreed to start relocating a little over 32,000 migrants among the EU's 28 members in October, falling around 8,000 short of the target agreed to by EU leaders at a summit in June.

"We are almost there. The remaining 8,000 will be allocated by the end of this year, by December," EU Migration, Home Affairs and Citizenship Commissioner Dimitris Avramopoulos told at a press conference.

"I'm disappointed this did not happen today, but it was a very important step forward," he added.

The European Commission originally proposed relocating 40,000 migrants after an unprecedented amount of migrant shipwrecks in the Mediterranean in April left nearly 800 people dead. EU leaders agreed on the figure in June but have been bitterly divided over how to reach it, first rejecting compulsory quotas and then arguing over how to redistribute them. Luxembourg, which holds the rotating six-month presidency of the EU, said the justice and home affairs ministers had agreed to relocate 32,256 Syrians, Eritreans, Iraqis and Somalis who had landed in Greece and Italy. "The first individuals can be relocated as of October this year," said Jean Asselborn, Luxembourg's foreign minister who is also responsible for migration.

The ministers also agreed to relocate an additional 22,504 Syrian refugees currently living in camps outside the EU, actually exceeding their target for refugees of 20,000. "The European Union will not become a fortress," Asselborn said.

More than 1,900 migrants have died this year making the perilous journey across the Mediterranean to Europe out of around 150,000 people who have made the crossing, the International Organization for Migration said earlier this month. The migrants are seeking refuge from conflicts and poverty in Africa and the Middle East. Some governments, including those in Central and Eastern Europe, objected to earlier EU proposals to establish quotas on migrant arrivals.

EU sources said the countries that were most reluctant to admit migrants were Hungary, Austria, Slovakia, Slovenia, the Baltic countries and Spain. Hungary refused to admit both migrants seeking asylum and refugees who had already been approved for asylum, according to EU figures. Austria refused to accept asylum seekers but agreed to take in 1,900 refugees.

Asselborn harshly criticized some countries without naming them, saying the figures were "perhaps disappointing, in some instances even embarrassing." The tiny duchy of Luxembourg agreed to admit 320 asylum seekers and 30 refugees. Latvian Minister of the Interior Rihards Kozlovskis said his country was reluctant to admit migrants partly because it feared a surge of refugees from nearby Ukraine, which is embroiled in an armed conflict. Latvia offered to take 200 asylum seekers and 50 refugees.

At the EU leaders' summit in June, Renzi was said to have lashed out at his colleagues after mandatory quotas were rejected, reportedly saying: "If that is your idea of Europe, you can keep it." As well as migrants crossing by sea, thousands more have crossed into Europe by land, many of them through Hungary, which said last month it would build a 4-meter-high fence along its border with Serbia to keep migrants from entering.

Compared to Syria's neighboring countries, the U.N. refugee agency encouraged European countries to do more to share the burden of the international community in the migrant crisis. Even though the number of Syrians who have fled the war in their country has been increasing, the percentage of refugees heading to Europe remains small with only around 4 percent of Syrians having sought asylum in European countries. Syria's neighboring countries – Turkey, Lebanon, Jordan and Iraq – have over 3 million Syrian refugees, a number that is not comparable with the total number of Syrian refugees that have sought shelter in Europe. Ensuring access to asylum for refugees, including at sea and land borders, remains a significant challenge for EU countries as human rights organizations have urged EU member states to fulfill their international protection obligations.
Last Update: Jul 21, 2015 9:13 pm
RELATED TOPICS