Germany demands explanation from US over alleged NSA spying 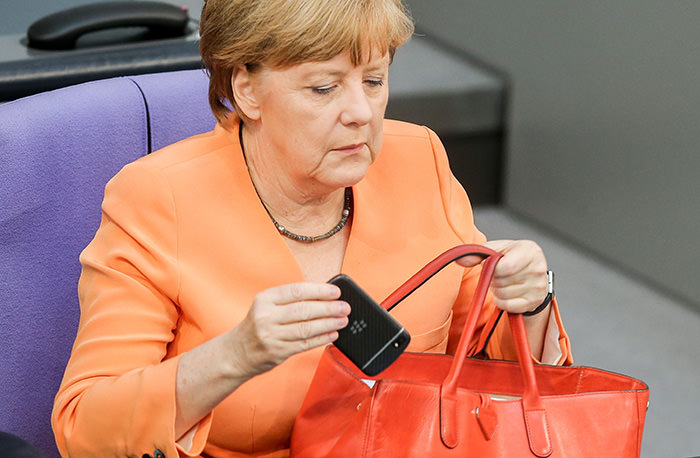 German Chancellor Angela Merkel taking her mobile phone out of her handbag during a parliamentary session in Berlin, Germany (EPA Photo)
by Anadolu Agency Jul 22, 2015 12:00 am
Germany has demanded an explanation from the United States about claims that the National Security Agency (NSA) eavesdropped on Foreign Minister Frank-Walter Steinmeier's telephone conversations.

German Foreign Ministry spokesman Martin Schaefer told reporters in Berlin on Wednesday that recent revelations from the whistle-blower website WikiLeaks had been carefully examined by officials, but their authenticity and source could not be verified.

"Steinlein has urgently pointed out that we are waiting for clarification and explanation from the American side on the recent matter and other questions which are still open," he said.

Asked whether the U.S. ambassador was summoned after recent WikiLeaks revelations, Schaefer said that Emerson was on a visit to southern Germany and was contacted by phone.

"Now we are waiting for answers from the American side, as soon as possible," he stressed.

The documents reportedly include a list of 20 German mobile and landline numbers belonging to senior Foreign Ministry figures that were monitored by the NSA.

WikiLeaks also revealed a purported NSA report on intercepted conversations between Steinmeier and an aide following his return from an official visit to Washington D.C. in late 2005.

Earlier this month, WikiLeaks claimed it had proof that the U.S. had spied on Germany's political leaders and senior officials since the 1990s, including Chancellor Angela Merkel.

NSA whistleblower Edward Snowden's revelations in 2013 showed for the first time that Merkel's private mobile phone had been on a monitoring list.

Last year, Attorney General Harald Range opened an investigation into the claims but it was shelved last month due to a lack of evidence.

NSA's alleged surveillance has strained ties between Washington and Berlin but Merkel has refrained from steps that could undermine Germany's close cooperation with the U.S. on security and foreign policy.

Germany has repeatedly raised its uneasiness over the NSA's activities but has failed to convince the U.S. to sign a no-spy agreement.