British PM Cameron comes under fire for remarks on migrants 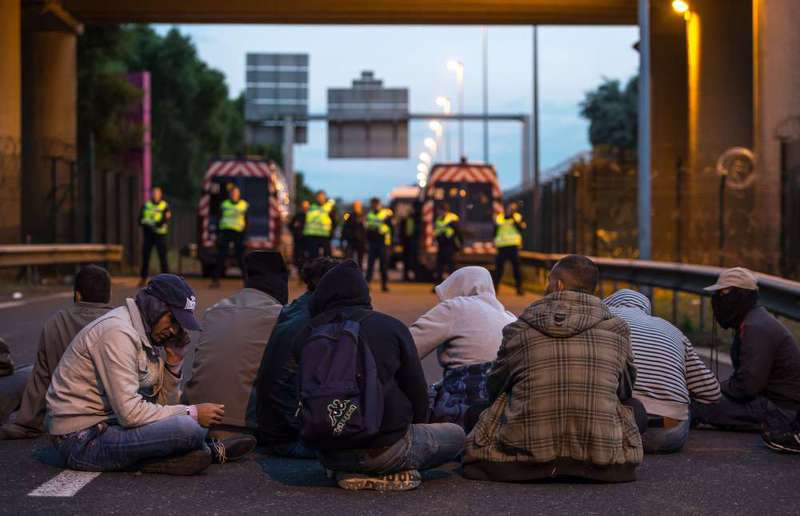 French gendarmes stand facing a group of seated migrants as they block their way to the Eurotunnel site in Coquelles near Calais, northern France.
by Daily Sabah with Agencies Aug 01, 2015 12:00 am

As the Calais migrant crisis comes to the forefront again in the U.K. and France, British PM Cameron was criticized for using the word ‘swarm' to describe migrants in an effort to tackle the situation

British Prime Minister David Cameron convened a meeting of his government's emergency response committee to discuss what more it could do to tackle a spike in attempts by migrant to enter Britain illegally via the Channel Tunnel from France.

Cameron is under growing pressure to deter migrants, many of whom have traveled from Africa and the Middle East, after repeated disruption to cross-Channel passenger and freight traffic, which has become front page news. Cameron will chair the meeting of the committee, known as Cobra, later on Friday after calls from some politicians to mobilize the British army to reinforce border controls. The government has said it is working to erect new security fencing around the French port of Calais, the flashpoint for the crisis.

Re-elected in May, Cameron has promised to cut net annual migration to Britain to the tens of thousands, a pledge he failed to keep during his first from 2010 to 2015 term in office when it hit a near record high of over 300,000 people per year. The issue is a sensitive one for Cameron as it plays into Britain's debate about Europe ahead of an EU membership referendum which he has promised to hold by the end of 2017 after trying to reshape his country's ties with the bloc. Migrants have long gathered in Calais to try to board lorries and ferries to Britain. But Eurotunnel, the firm that runs freight and passenger shuttles via the Channel Tunnel, says their numbers have now swelled to around 5,000 people from about 600 and that it is struggling to cope. It says the migrants have also become better organized, mounting nightly attempts in large groups to storm the facilities.

Eurotunnel has sometimes been forced to suspend its services because of such activity, causing disruption at what is one of the busiest times of the year for British holidaymakers. The situation has caught the imagination of Britain's tabloid newspapers, becoming a political headache for Cameron, who has spent the past week in southeast Asia on a trade mission while the crisis has flared. He is under pressure to get tough on the migrants from many lawmakers in his ruling Conservative Party who say voters are fed up with what they see as lax border controls

Meanwhile, a senior United Nations official warned that Britain risked a "xenophobic response" to the migrant crisis in Calais, after Cameron promised to deport more migrants. Demands for the British government to keep out economic migrants are "a xenophobic response to the issue of free movement," Peter Sutherland, the U.N. secretary-general's envoy on international migration, told the BBC. Facing a "very testing" situation, Britain will deport more illegal migrants "so people know it's not a safe haven," Cameron told reporters in Vietnam. He said Britain and other European nations faced a "swarm of people coming across the Mediterranean, seeking a better life." The opposition Labour party has also criticized Cameron for referring to the migrants as a "swarm of people," saying that the term was dehumanizing and stirred public hostility against people often fleeing poverty and conflict.

"Last year the total approval of refugees coming into France was 68,000, which is more than twice the figure of the U.K.," Sutherland told an Irish broadcaster. "There should be a fair allocation across EU countries," he said.

Germany received 175,000 asylum applications last year, compared with 24,000 for Britain, Sutherland told the BBC. "We are talking here about between 5,000 and 10,000 people in Calais who are living in terrible conditions," he said. Opposition politicians and the London-based Refugee Council also criticized Cameron. Acting Labour leader Harriet Harman accused him of using "inflammatory language," while Labour leadership candidate Andy Burnham called his comments "disgraceful." "We are talking about human beings here, not insects," said Liberal Democrat leader Tim Farron, referring to Cameron. "This sort of rhetoric is extremely inflammatory and comes at a time when the government should be focused on working with its European counterparts to respond calmly and compassionately to this dreadful humanitarian crisis," said Lisa Doyle, the Refugee Council's head of advocacy. Hundreds of migrants stranded in Calais continued efforts to reach the Channel Tunnel linking the two nations for a fourth day early Thursday.

The British and French governments on Wednesday vowed to tighten security around Calais following the ninth death of a migrant in the past five weeks on Tuesday. A 16-year-old Egyptian migrant was electrocuted and suffered life-threatening injuries after he climbed onto the roof of a British-bound train on Wednesday at the Gare du Nord station in Paris, the France Info website reported. Interior Minister Bernard Cazeneuve said on Wednesday that France will deploy 120 extra police officers in Calais but added that operator Eurotunnel, which reported intercepting 37,000 migrants this year, "must also take responsibility" for improving security.

Europe is facing "an exceptional migration crisis... [with] tragic human consequences," Cazenueve said, reporting nearly 230,000 illegal entries to the EU's Schengen nations from the Horn of Africa, Syria, Iraq and Afghanistan this year. "Calais is a mirror of the conflicts and crises tearing some regions of the world apart," he said, urging "resolute action from the European Union." Calais is one of the front lines in a wider immigration crisis in which European countries are struggling to agree among themselves how to address the growing numbers of migrants fleeing conflict or poverty.
Last Update: Aug 01, 2015 2:22 am
RELATED TOPICS