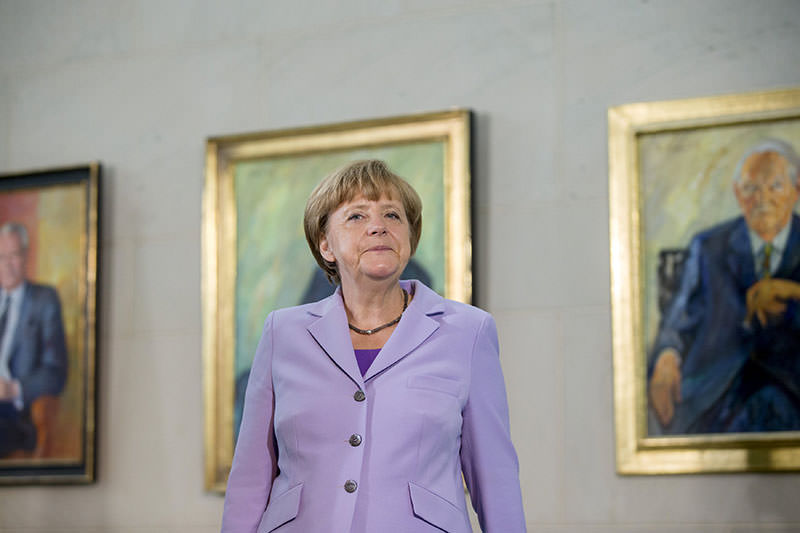 German Chancellor Angela Merkel receives diplomatic corps in the Chancellery in Berlin, July 13, 2015. Merkel stands in front of portraits of former German chancellors (Reuters photo)
by Aug 01, 2015 12:00 am
Chancellor Angela Merkel, who has ruled Germany since 2005, has decided to run for a fourth term and has started planning her 2017 re-election campaign, according to an unsourced report on Saturday in Der Spiegel news magazine.

A spokeswoman for Merkel's Christian Democrat (CDU) party declined to comment on the report. The chancellor is on a hiking holiday in the Alps.

Merkel, who turned 61 on July 17, has not made any public comments about whether she would run for a fourth term, although she did hint in a speech in Cologne last year she would stand again.

Merkel, who has guided Europe's biggest economy through the 2008 financial crisis and euro zone turmoil, regularly ranks as one of Germany's most popular leaders, which is unusual for a sitting chancellor.

There are no term limits in Germany and the last CDU chancellor, Helmut Kohl, ruled for 16 years before losing his bid for a fifth term in 1998 to Gerhard Schroeder of the Social Democrats (SPD). Neither were as popular among voters as Merkel.

In a country that cherishes stability after the Weimar Republic's chaos contributed to Hitler's rise, Merkel is only the eighth post-war chancellor. Her CDU has no obvious successor.

"Merkel has evidently decided to run again in 2017," the authoritative newsweekly Der Spiegel wrote, news to cheer her conservative party that depends on her popularity to hold the chancellery after suffering a string of state election defeats.

"The campaign operations should be based in CDU party headquarters," the magazine said. "As a result of that meeting, the first staff workers are being recruited."

Merkel is so popular in Germany that one SPD leader, Schleswig-Holstein state premier Torsten Albig, said recently the SPD should not bother putting up a candidate to run against her in 2017. "She's doing an excellent job," Albig told NDR TV.

There was speculation two years ago that Merkel would step down in the middle of her current term but that was denied by her spokesman Steffen Seibert, who said Merkel would decide about a fourth term nearer to the election due in late 2017.