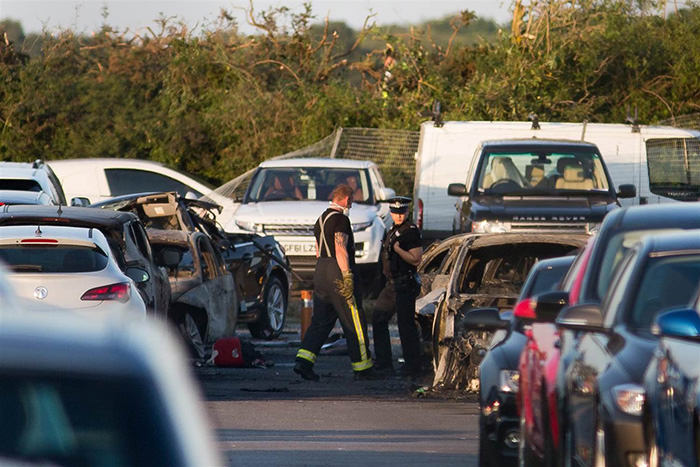 |EPA Photo
by Aug 01, 2015 12:00 am
Members of Osama Bin Laden's family were among the victims in the crash of a private jet in Britain, the Saudi embassy in London said Saturday in a message of condolences.

Four people died when the Saudi Arabia-registered plane ploughed into a car auction site and burst into flames in southern England on Friday.

Local police said the pilot and three passengers died when the Phenom 300 jet attempted to land at Blackbushe Airport in Hampshire and that no one was injured on the ground.

The Saudi ambassador "offered his condolences to the sons of the late Mohammed bin Laden and their relations for the grave incident of the crash of the plane carrying members of the family at Blackbushe airport," read a statement posted on the embassy's official Twitter account.

It did not confirm the identities of those killed.

The embassy also said it would work with British authorities to investigate the incident and repatriate the bodies for burial in Saudi Arabia.

Mohammed Bin Laden himself died in a plane crash in Saudi Arabia in 1967.

His son Osama, the late supreme leader of the Al-Qaeda militant network, was shot dead by US special forces in Pakistan in 2011.

Footage of the aftermath of Friday's crash showed plumes of black smoke rising into the sky and several cars on fire in the outdoor area of British Car Auctions, where vehicles were parked awaiting sale.

Saudi Arabia's General Authority of Civil Aviation said in a statement Friday that the plane was registered in the Gulf state, and that it would work with British investigators to determine the cause of the crash.

The BBC reported that the aircraft had taken off from Milan's Malpensa airport in Italy.
Last Update: Aug 01, 2015 10:14 am
RELATED TOPICS