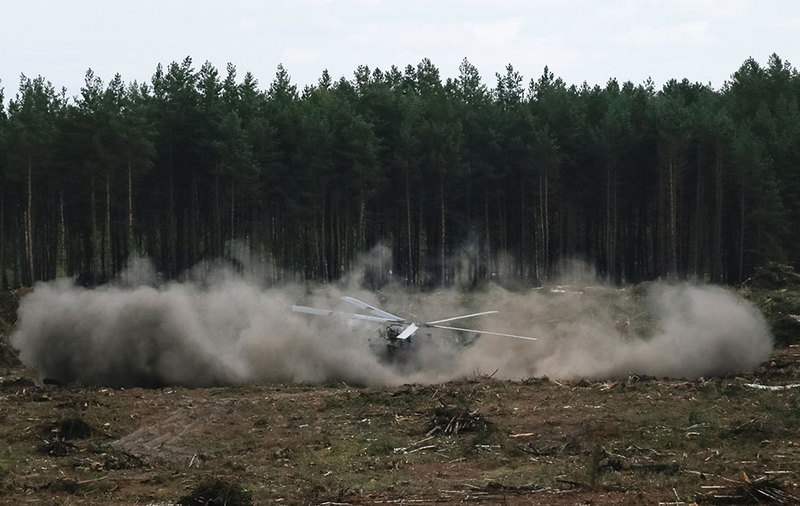 
A Russian air force helicopter crashed during an air show on Sunday in front of thousands of spectators, killing one pilot, the latest in a string of military crashes.

The Mi-28 helicopter gunship was part of a flight of helicopters performing aerobatics at the Dubrovichi firing range in Ryazan region, about 170 kilometers (105 miles) southeast of Moscow, when it crashed Sunday. The Defense Ministry said the second pilot who survived the crash was in satisfactory condition.

The Russian air force proceeded to ground all Mi-28 flights after it was revealed that the crash could have been caused by equipment failure.
There was no damage on the ground, and the Defense Ministry emphasized that the flights were conducted at a safe distance from the crowd and there was no danger for those who watched the air show.

The footage broadcast by Russian television showed four gunships performing stunts and firing flares. One helicopter is then seen spinning down fast before it hit the ground and exploded.

The air show Aviadarts, where air force plane and helicopter crews compete to carry out timed tasks, was suspended for the day.

Television footage showed rescue workers attending to the smoldering helicopter lying on its side in the airfield after it crashed and burst into flames.

The defense ministry said the accident was apparently caused by a hydraulic system failure, which was reported by the surviving pilot who ejected from the chopper.

"According to the second pilot, the catastrophe happened due to aviation equipment failure," said commander of Russian air force Viktor Bondarev. "I have stopped all flights on Mi-28" until an investigation is complete.

The Mi-28 is a two-seat attack helicopter replacing older Soviet-built gunships in the Russian inventory since mid-2000's. It has been exported to Iraq and Kenya, among other countries.

Sunday's aerobatics show was part of the International Army Games, competitions involving troops from Russia and several other nations at shooting ranges across Russia that began Saturday.

There have been at least six incidents over the past few weeks involving Russian military planes and helicopters.