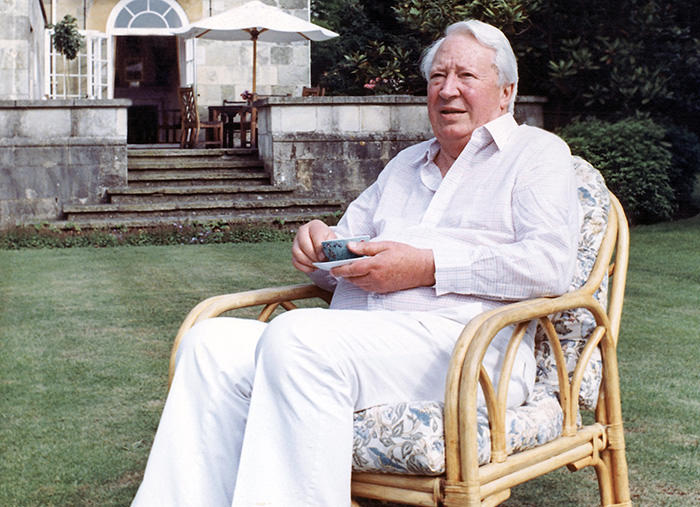 1989 file photo of former British Prime Minister Edward Heath as he takes tea in the garden of his home in Salisbury, England (AP Photo)
by Aug 03, 2015 12:00 am
A former prime minister was drawn into the complex web of historic child sex abuse allegations in Britain Monday, when the police watchdog announced an investigation involving 1970s leader Edward Heath.

The Independent Police Complaints Commission (IPCC) said it would investigate a claim from a retired senior policeman that prosecution of a person accused of child sex abuse in the 1990s was dropped when they threatened to expose Heath.

The former leader of the centre-right Conservatives was prime minister between 1970 and 1974, leading Britain into the European Economic Community in 1973 after a referendum. He died in 2005.

While the IPCC's investigation is into alleged historic corruption rather than whether Heath committed a crime, it is the first time so a senior figure has been named in connection with such claims.

The probe is separate to a major, judge-led inquiry into child sexual abuse in British institutions such as the BBC, the National Health Service, children's homes and schools that was opened last month.

"It is alleged that a criminal prosecution was not pursued when a person threatened to expose that Sir Edward Heath may have been involved in offences concerning children," an IPCC spokesman said.

The IPCC will also investigate whether officers with Wiltshire Police in western England subsequently took any steps to investigate the claims about Heath's actions.

"Sir Edward Heath has been named in relation to offences concerning children," Wiltshire Police said in a statement that noted the former premier resided in a local city.

"He lived in Salisbury for many years and we would like to hear from anyone who has any relevant information that may assist us in our enquiries or anyone who believes they may have been a victim."

There has been a surge of complaints about child sex abuse since BBC presenter Jimmy Savile was exposed as a prolific and predatory paedophile after his death in 2011.

British police said in May they had received allegations of historic child sex abuse against 261 public figures, including 76 politicians.

The inquiry led by a judge into allegations of paedophilia in institutions has cited estimates that around one British child in every 20 has been sexually abused.
Last Update: Aug 03, 2015 5:11 pm
RELATED TOPICS