Migrants in Calais step up attempts to get into Channel Tunnel 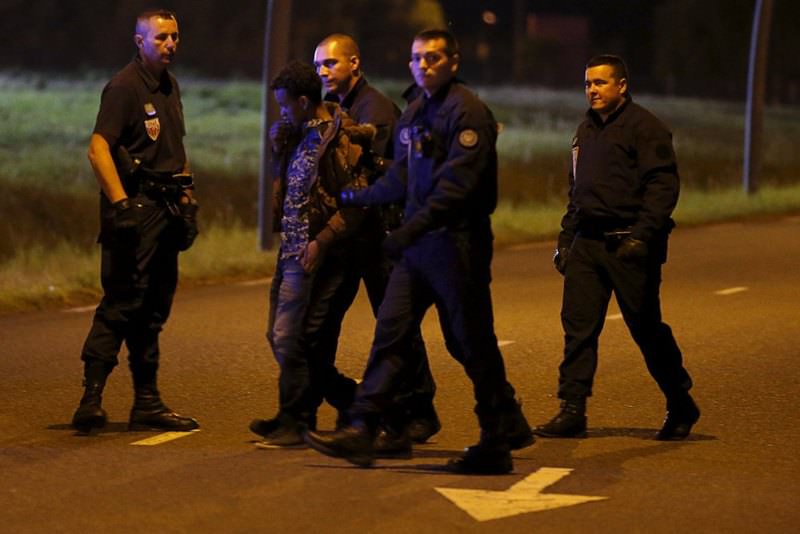 French riot police detain a migrant near a fence as he attempts to access the Channel Tunnel in Calais.
by Daily Sabah with AFP Aug 04, 2015 12:00 am

As the escalating migrant crisis in Calais still awaits a proper solution, French police bolstered their presence with 120 additional officers along with U.K. government promises of new measures to crack down on illegal migrants

Migrants in Calais made around 1,700 attempts overnight to penetrate the Channel Tunnel premises in a bid to get to England, French police sources said yesterday. Of the 1,700 attempts, some 1,000 were "pushed back" by authorities and 700 were intercepted within the 650-hectare Channel Tunnel site, police added.

The 1,700 attempts represent a major increase from the last few nights when only a few hundred were registered. The chaos at Calais spiked last week when more than 2,000 attempts were made to breach the Eurotunnel defenses and one person was killed, a Sudanese man in his 30s, who was apparently crushed by a lorry. At least 10 people have died since June in the rush to sneak into the U.K., which is seen by migrants as an "El Dorado." French police have bolstered their presence with 120 additional officers, which appear to be reducing the number of nightly attempts to storm the Eurotunnel premises.

It has been also reported that French riot police used tear gas on migrants as they tried to cross the Eurotunnel from Calais into Britain and some migrants responded by throwing stones. Al-Jazeera reporter Charles Stratford, reporting from Calais, described the conditions in the camp as "utterly atrocious." Most of the migrants have fled war, dictatorship and poverty in Africa and the Middle East, entering Europe via Greece or Italy before heading north. Many think Britain offers the best prospects because of the English language, welfare benefits and the perceived ease of getting a job.

The issue has become a cross-channel political issue, with British Prime Minister David Cameron coming under fire for comments in which he referred to "swarms" of people seeking to get into the country. Anger is also mounting in France over the issue. Henri Guaino, a lawmaker from the opposition right-wing party Les Republicains, called on London to "do their share." "There is no reason for these people to be stored – if I may say this because it's almost that – in France. It cannot go on like this," Guaino said. "The situation is fairly simple. Migrants come to Calais to get to England. England does not want them. Therefore, the migrants pile up in Calais and try by whatever means they can to reach England."

The migrant activity in the region combined with a series of strikes by French ferry workers has disrupted freight and passenger traffic, and spurred both governments to promise higher fences, more surveillance cameras and extra security guards. Earlier this week, the British government pledged $11 million to improve fencing around the Eurotunnel rail terminal in Coquelles, outside Calais. And Cameron, who has warned that the crisis could last all summer, promised "more fencing, more resources [and] more sniffer dog teams" to aid French police.

Meanwhile, Britain's government promised new measures yesterday to crack down on illegal immigrants by making landlords evict them. Landlords in England who do not remove people with no right to remain in Britain or do not check their immigration status before renting them a property could be jailed for up to five years. The move, announced by Communities Secretary Greg Clark, is set to be included in a new immigration bill that parliament will debate in the coming months. Cameron's government has previously announced that the new immigration bill will also include giving police the power to seize wages earned by illegal immigrants.

Nightly attempts by large groups of the estimated 5,000 migrants in Calais to force their way through the rail tunnel linking France and Britain have provoked public anger and severely disrupted the flow of goods between the two countries. "There are no easy solutions – and it is not for the U.K. and France to solve these problems alone," British Interior Minister Theresa May and her French counterpart Bernard Cazeneuve said in a joint letter published in The Sunday Telegraph. Cazeneuve said stopping the flow of migrants was "the top priority" for both governments. But they added that the entire EU must "address this problem at its root." They said many migrants saw the streets of Europe as "paved with gold" and "we must break the link between crossing the Mediterranean and achieving settlement in Europe for economic reasons." The governments are keen to show a united front on this issue, but many British politicians have criticized France for supposedly lax security at the tunnel.

The French port of Calais has become a focal point for the huge influx of migrants entering Europe, and several people have been killed trying to enter Britain, where they believe they have better prospects of a new life.
RELATED TOPICS