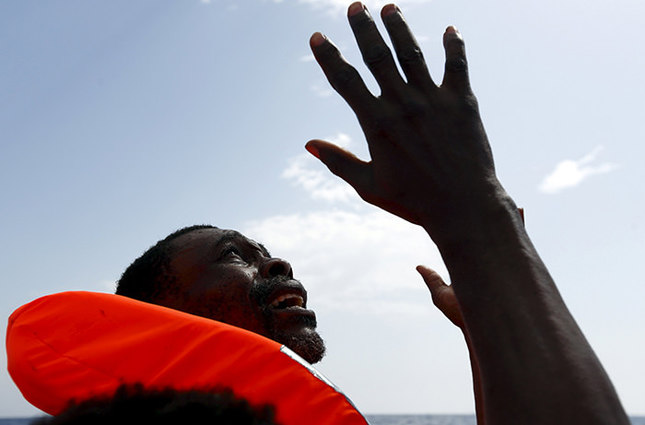 by Daily Sabah with AFP Aug 05, 2015 12:00 am
More than 2,000 people have died so far this year trying to make the perilous journey across the Mediterranean to Europe, the International Organization for Migration said yesterday, making it the world's most dangerous migrant route. "Unfortunately, we have now reached a milestone whereby over 2,000 migrants and refugees have died as of this past weekend," IOM spokesman Itayi Virri told reporters in Geneva.

The organization said around 188,000 people had been rescued so far this year trying to cross the Mediterranean, and warned the 200,000-mark could be crossed by the end of the week. IOM said the latest toll confirms "this route as the deadliest for migrants in search of a better life," and warned the situation was worsening.

During the same period last year, 1,607 migrants had perished trying to make the journey, with 3,279 dying in all of 2014. Nearly all of the people flooding across the Mediterranean so far this year, often in rickety boats and at the mercy of human traffickers, have landed in Italy (97,000) and Greece (90,500), the IOM said.

Virri said the so-called central Mediterranean route had proved by far to be the deadliest, with just over 1,930 people dying while trying to cross from Libya to Italy so far this year, while only about 60 had died trying to reach Greece. The IOM said that traffickers taking people to Italy tended to use more unseaworthy vessels, leading to the higher death toll.

While lamenting the tragic milestone of more than 2,000 deaths, Virri pointed out that increased European Union efforts since April to rescue migrants at sea meant, "a lot of people have been saved who otherwise would have lost their lives." Nineteen people had lost their lives in the Channel of Sicily last week alone, with the bodies of 14 migrants brought to the Sicilian port of Messina on July 29. They had been traveling with 456 others who were rescued.

On Monday, 550 migrants rescued in the Mediterranean over the weekend arrived in Sicily aboard a ship operated by Doctors Without Borders (MSF), which also carried the bodies of five people who died at sea. The migrants who were brought to safety in Palermo had been traveling on several different boats and were rescued over the weekend, the aid group said.

The victims, four women and one man, were found dead on a boat that was rescued on Saturday with 112 people on board. They died, according to initial tests, as a result of dehydration. Shocked survivors said their rickety boat had only left Libya's shores for Italy 13 hours before they were rescued. In that short time, five of the children on board lost a parent. Meanwhile, the organization cited media that reported yesterday the death of a 27-year-old Moroccan man, who suffocated when hidden in a suitcase.

"It is unacceptable that in the 21st century people fleeing from conflict, persecutions, misery and land degradation must endure such terrible experiences in their home countries, not to mention en route, and then die on Europe's doorstep," said IOM Director General William Lacy Swing.

Considering the sharp increase in the number of migrants trying to reach Europe's border, EU policies on migrants have been accused of undermining the value of human life while imposing strict measures over search and rescue operations. The new EU policy on sea rescues, Operation Triton, has led to many more migrant deaths and possible future tragedies due to the limited scope of the operation on the Mediterranean Sea.
RELATED TOPICS