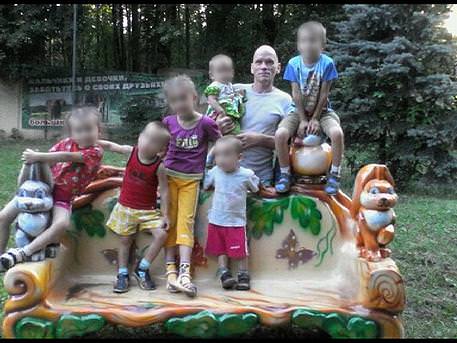 Taken from Twitter
by French Press Agency - AFP
Aug 05, 2015 12:00 am
Russian investigators said Wednesday they had arrested a man suspected of killing his common-law wife, his mother and six small children and hacking their bodies to pieces with an axe.

The Investigative Committee, which probes major crimes, said Oleg Belov was detained on suspicion of carrying out the murders, for which he could face up to 20 years in jail.

Police broke into the family apartment in the central Russian city of Nizhny Novgorod on Tuesday and found the bodies of the six children and their mother hacked to pieces.

A senior Russian official said the mother was believed to be pregnant when she was murdered.

The alarm had been raised after the children, all aged six and under, failed to turn up at kindergarten in late July.

Investigators also confirmed finding a woman's body, also hacked to pieces, in the neighboring Vladimir region who was preliminarily identified as Belov's mother.

The 52-year-old suspect was discovered at the summer house of the children's maternal grandmother, also in the Vladimir region.

Special forces shot Belov during the arrest operation and he was taken to hospital with an abdominal wound.

Local media said Belov was unemployed and lived on disability payments after being diagnosed with schizophrenia.

Investigators said they were focusing on why the local authorities had not taken Belov's children into care.

In a posting on Twitter, the Kremlin children's ombudsman Pavel Astakhov said the mother was believed to be pregnant when she was murdered.

He also said she had asked in July for Belov to be deprived of parental rights.

Investigators said they had also carried out searches at the local Seventh-day Adventist Church, a US-based Protestant sect that Belov and his family attended.