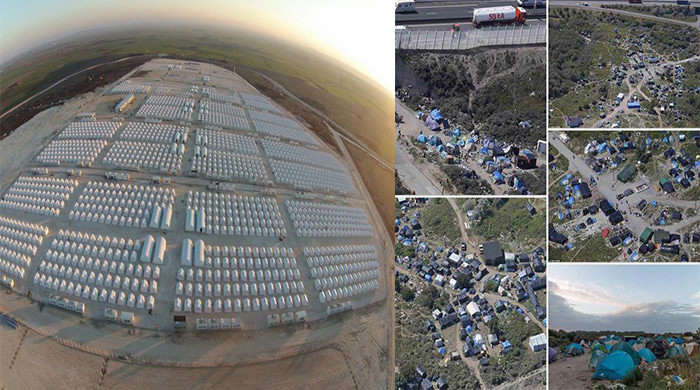 by Mehmet Çelik Aug 06, 2015 12:00 am
European countries have been experiencing an influx of migrants seeking asylum in recent years especially from Northern Africa, Syria, Iraq and Afghanistan, yet to this date European cities struggle in dealing with these human tragedies. Case in point is the French city of Calais.

Asylum seekers from Syria, Sudan, Afghanistan, and Eritrea have made Calais a place in which they hope to use as a crossing point from France to the United Kingdom, whereas French authorities have been restricting their stay in the city while at the same time are demolishing their camps.

Refugees seeking to reach to the U.K., sneak on to trucks travelling to Britain, or use the Channel Tunnel. However, on the road to a safer haven, many of them unfortunately die in those very same trucks.

Meanwhile, refugees escaping Syria and Iraq's civil wars have been welcomed by Turkish authorities and placed in well-organized camps in Turkey's southern border provinces. Many of the camps have schools, playgrounds for children, and other social amenities, including psychological assistance. Turkey has spent nearly six billion dollars on its refugee programs, while assistance from EU countries was around a meager 450 million dollars.

According to recent U.N. figures, Turkey hosts nearly two million Syrian refugees who have fled the civil war in Syria - which has been continuing for over four years - in 25 camps built by the Prime Ministry of Disaster and Emergency Management Authority (AFAD).

The camps have received several awards and been praised by international visitors for their efforts in providing sustainable services. The largest camp is in the border town of Suruç, located in the southeastern province of Şanlıurfa, which opened in February 2015 and hosts nearly 25,000 refugees.

The striking difference between Europe and Turkey's handling of the refugee situation in their countries is clearly portrayed in the photo above, where the left represents a shot from a refugee camp in Turkey's southern district of Şuruç, while the images on the right were taken of make shift camps where migrants in the French city of Calais are forced to spend their time until they get a chance to flee to the U.K.
Last Update: Aug 06, 2015 2:01 pm
RELATED TOPICS