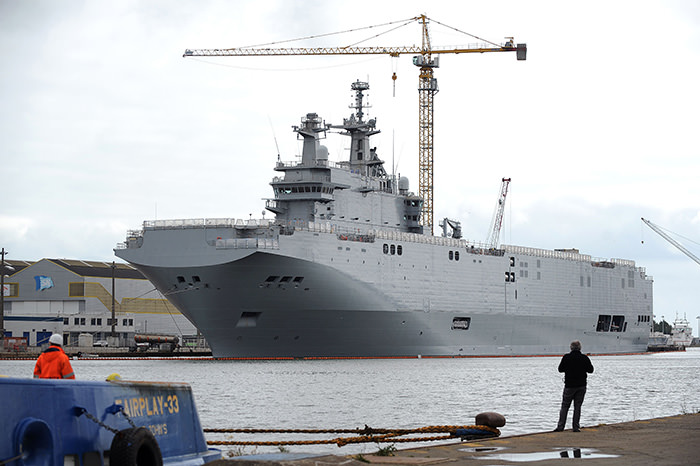 |AFP Photo
by Aug 06, 2015 12:00 am
French President Francois Hollande's office said Wednesday he had reached an agreement with his Russian counterpart Vladimir Putin on compensation for failing to deliver two Mistral warships over the Ukraine crisis.

The fate of the two helicopter carriers has plagued Franco-Russian ties for more than a year, following Paris' decision in November to put the 1.2-billion-euro ($1.3-billion) deal on ice as the West slapped sanctions on Moscow over its annexation of Crimea and alleged backing for separatist rebels in Ukraine.

Russia would be "fully reimbursed" for the two warships which France will keep, the Elysee Palace said in a statement.

It added that all Russian equipment installed on the ships will be removed and handed back to Russia.

Russia, meanwhile, said France had already returned the money it paid out for the warships and considered the matter closed.

"The president of Russia and the president of France took a joint decision to annul the contract," the Kremlin said in a statement after a phone talk between the two leaders.