Hungarians divided over tide of refugees as number grows 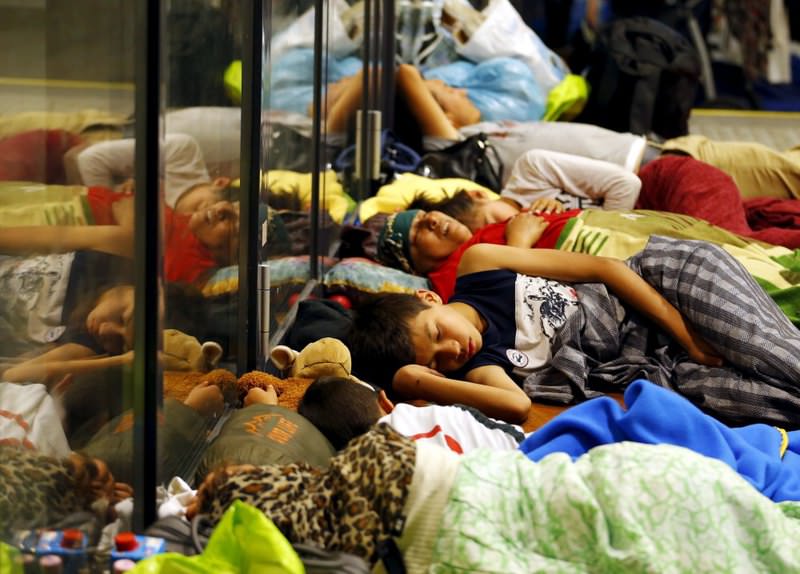 As the influx of refugees has grown, Hungarians have divided into those urging for more government help for migrants and others demanding a tougher government crackdown

Every day, some 1,500 mostly Afghan and Syrian refugees stream through the woods from Serbia into Hungary. Detained by police for registration, then set free and told to report to asylum centers, most make a beeline for the West instead, adding to the European Union's growing migrant crisis. The vulnerability of a border-free Europe is exposed at external frontiers like this dense forest where thousands of Middle Eastern migrants, often fleeing violence at home, cross into the EU's Schengen zone of passport-free travel.

While Hungary is a transit route rather than a destination for most, the growing influx is wearying and polarizing the central European country and fueling racism. Conflicts have begun to appear as the government takes an ever harder line. Some locals say that they are concerned with the growing flow. "People here have had enough," Olga, a Hungarian woman in her 50s who did not want to give her last name, said. Her farm is within an earshot of the border. Migrants have done her no harm but she still views them with suspicion and resentment.

Hungary's leaders have tried to shut down the growing flow. Construction began this week on a 175-kilometer razor-wire border fence to deter migrants and asylum laws were tightened to allow swift deportation. Hungary has started refusing to take back migrants from other EU countries even when the bloc's rules require it. Populist right-wing Prime Minister Viktor Orban has justified his stance by conflating immigration with terrorism, increased crime and unemployment, adding that Hungary will act on its own because the European Union offers no solution.

Latching on to televised scenes of migrants trying to force their way into the Channel Tunnel to enter Britain from France, Orban has echoed former French President Nicolas Sarkozy's warnings of a massive flow of migration expected from the south. Some of the migrants in Calais likely came through Hungary, where new arrivals often say they aim to move on to Britain.

Several said they rushed to get into Hungary before it completes the border fence and migrants become trapped in non-EU member Serbia, set to be a new bottleneck in the migration wave. Typically, the migrants enter the EU first in Greece, crossing from Turkey, but are waved through by authorities overwhelmed by an economic crisis and unable to cope. From there, the main route goes through Macedonia into Serbia.

As the influx has grown, Hungarians have divided between those urging more government help for migrants and others demanding a tougher government crackdown. Last month a fringe far-right movement organized a protest at a Budapest railway terminus against what they called "African hordes" and threatened to take matters into their own hands if the government did not stop migrants. "We do not welcome them," Gyorgy Zagyva, a former lawmaker from the far-right Jobbik party and a leader of the fringe group known as the 64 Counties Youth Movement, a reference to Greater Hungary, told about 300 rowdy protesters.

On the other side, volunteer groups have taken to social media such as Facebook to mobilize help for migrants and show that hatred can be reduced and tensions defused. Some hand out water, food, information and offer basic services, mostly at train stations. In Szeged, a group named MigSzol (Migration Services) runs a wooden hut outside the train station that has quickly become a busy service station for the migrants - and a target of abuse by people who resent them. The activists have settled into a routine: migrants arrive in police buses, eat, drink, clean up, rest, charge phones and get basic information, then board a Budapest-bound train. The plaza is cleaned with bleach, then the next bus arrives.

"It shouldn't be up to volunteers to do this work, but we do it because nobody else will," MigSzol co-founder Agnes Szoke-Toth said. "Feed the hungry, give water to the thirsty, offer a smile ... this is a time to act." Hate crimes have so far remained limited, with sporadic instances of fights and thefts.

Critics say the government's rhetoric fans the flames and is aimed at making political gains for the ruling Fidesz party rather than tackling the problem. The Hungarian Helsinki Committee, a rights group, said the government inflates the problem by highlighting that nearly 100,000 migrants have arrived in Hungary so far this year, more than double the 43,000 in the whole of 2014.

"Ninety percent or more of those people are no longer in Hungary," Helsinki Committee co-chair Marta Pardavi told Reuters. "There are more people homeless in Budapest, only the migrants are more visible."

The legal amendments, the border fence and the refusal to take back migrants from elsewhere in the EU could quickly drain Hungary of most migrants, Pardavi said. "If all this is taken together it can very easily create a situation where there will be very few asylum seekers in Hungary," she said.

Analyst Peter Kreko of the Political Capital Institute, an independent think-tank, said the government's action could be justified since the problem was real, but its rhetoric showed its main motivation was political gain, not problem solving. "The government's motivation is mainly domestic political," he said. "And in this regard it is quite successful: Fidesz has managed to halt its drop in popularity of the last few months."

He added that the far-right Jobbik party sometimes seemed to set the tone for the government. "What Jobbik does today can be what the government does tomorrow," he said. "In the overall immigration debate, especially the rhetoric, I think Jobbik really served as a model."
RELATED TOPICS