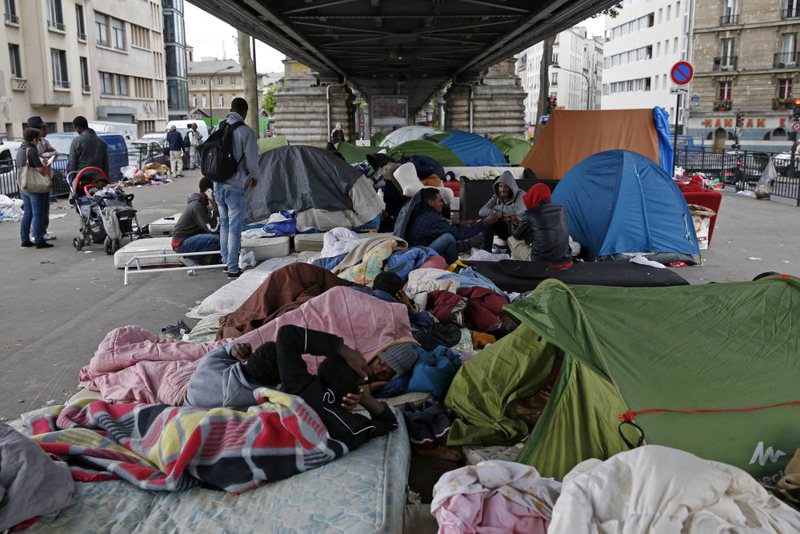 As migrant crossings via the Mediterranean to reach Europe have hit the highest numbers on record with some 224,000 having crossed so far, the UN refugee agency criticized the EU for its policy failure

Some 224,000 migrants and refugees have crossed the Mediterranean to Europe so far this year, the U.N. said Thursday, a day after more than 200 people were feared drowned while trying to make the perilous journey. The U.N. Refugee agency (UNHCR) said the crisis in Europe is a crisis because Europe fails to respond to it in a coordinated fashion, not because the number of refugees increase, Al Jazeera reported.

"What we have at Europe's doorstep is a refugee crisis," U.N. refugee agency spokesman William Spindler told AFP in an email. He said that by the end of July, around 224,000 refugees and migrants had arrived in Europe by sea. That number is already higher than the total of 219,000 people who made the journey during all of 2014, which until now was the highest number on record. Nearly all of the people crossing the Mediterranean during the first seven months of the year, often in rickety boats and at the mercy of human traffickers, have landed in Greece (124,000) and in Italy (98,000), he said. During that period, far from everyone has made it to shore, with more than 2,100 people drowning or going missing, Spindler said. He said this figure did not take into account the estimated 200 people believed to have perished in a shipwreck off the coast of Libya on Wednesday.

Their fishing boat, believed to have been carrying more than 600 people, ran into difficulty about 15 nautical miles off Libya and tipped over when rescuers neared, after frantic migrants rushed to one side in their desperation to be saved. Irish patrol vessel Niamh, first on the scene of the disaster, arrived in Palermo Thursday with 367 survivors, including 12 women and 13 children, as well as 25 bodies recovered from the sea. Two similar incidents in April cost the lives of around 1,200 people. Many of those risking their lives to cross the Mediterranean to travel on to other European countries, with a number of them setting their sights on Britain, which along with France is grappling with a migrant crisis of its own.

The waves of arriving migrants has sparked outcry and growing anti-foreigner rhetoric in many countries, but Spindler said most of those arriving on the continent this year had little choice. "Most of those crossing the Mediterranean are refugees fleeing war and persecution, not economic migrants," Spindler said, adding that Syrians fleeing the bloody civil war accounted for 38 percent of arrivals this year. Eritreans make up 12 percent of those landing on Europe's shores, followed by Afghans at 11 percent, Nigerians at 5 percent and Somalis at 4 percent, he said. Spindler criticized European countries for not better coordinating their response.

"The reason this is a crisis is not because of the number of refugees, but because of Europe's failure to respond to it in a coordinated fashion," he said. "European countries need to work together rather than point fingers at each other."

The International Organization for Migration (IOM) announced on Monday that more than 2,000 people have died so far this year trying to make the perilous journey to Europe. "It is unacceptable that in the 21st century, people fleeing from conflict, persecutions, misery and land degradation must endure such terrible experiences in their home countries, not to mention en route, and then die on Europe's doorstep," said IOM Director General William Lacy Swing. The worst Mediterranean disaster in decades took place in April when a trawler packed with migrants capsized off the coast of Libya, killing around 800 people.

The increasingly violent and chaotic situation in the Middle East has led many people to flee the conflict in an attempt to seek security and shelter in more prosperous and peaceful countries in Europe. The number of refugees fleeing violence has been gradually increasing as hundreds of immigrants hope to reach the European shores of Italy, Malta, Spain, Greece and Cyprus.

According to IOM's report, Greece is now the largest arrival point amid one of its worst economic crises. So far this year, more than 77,000 people have landed on Greek shores, according to the U.N. refugee agency. UNHCR spokesman William Spindler said the EU should activate its emergency response as "Greece is part of EU and it is happening on the doorstep of Europe." EU sources said the countries that were most reluctant to admit migrants were Hungary, Austria, Slovakia, Slovenia, the Baltic countries and Spain. Hungary refused to admit both migrants seeking asylum and refugees who had already been approved for asylum, according to EU figures. Austria refused to accept asylum seekers but agreed to take in 1,900 refugees.

Considering the sharp increase in the number of migrants trying to reach Europe's border, EU policies on migrants have been accused of undermining the value of human life while imposing strict measures over search and rescue operations. The new EU policy on sea rescues, Operation Triton, has led to many more migrant deaths and possible future tragedies due to the limited scope of the operation on the Mediterranean Sea. EU ministers could not agree on how to distribute all 40,000 mostly Syrian and Eritrean migrants from overstretched Italy and Greece last month. They agreed to start relocating a little over 32,000 migrants among the EU's 28 members in October, falling around 8,000 short of the target agreed to by EU leaders at a summit in June.
RELATED TOPICS