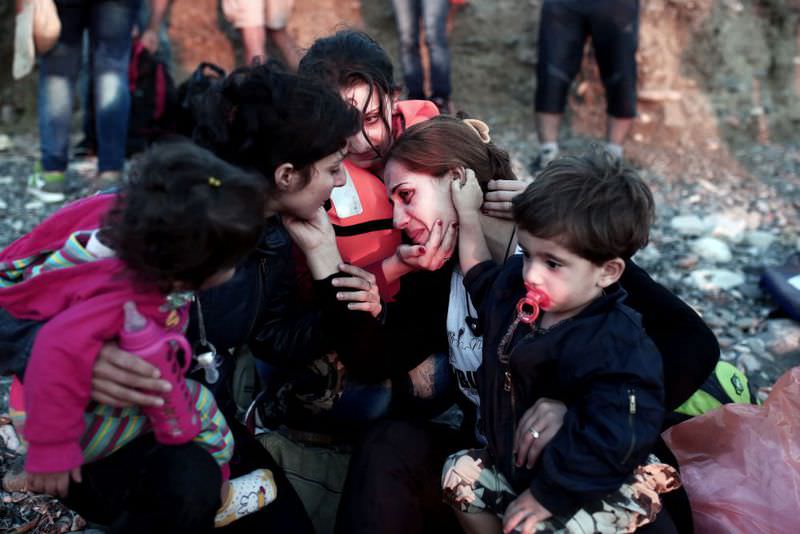 Migrant women and children comfort each other upon reaching the Greek island of Kos after crossing the Aegean Sea between Turkey and Greece.
by Daily Sabah with Wires Aug 14, 2015 12:00 am

Lacking access to basic needs such as food, water and sanitation, migrants on the Greek island of Kos are facing a humanitarian crisis as the country tries to deal with the immigration situation amid a major financial crisis

Locked in a sunbaked football stadium without food, drinking water or sanitation, about 1,000 refugees queued for hours on Wednesday to register with Greek authorities on the island of Kos, which is now at the forefront of a humanitarian crisis sweeping the financially broken country.

After sending police reinforcements, the government promised to charter a commercial ship to house up to 2,500 immigrants on the island where authorities have been overwhelmed by a spike in arrivals. Alekos Flambouraris, an aide to the prime minister, said the vessel would be used to provide shelter and check documents. More details of the plan were to be announced Thursday, his office said. The order to charter the ship was given after violence broke out in front of a police station on the holiday island, where migrants were lining up to receive temporary residence documents. A football stadium is currently being used to provide shelter for about 1,000 people.

Kos mayor Giorgos Kyritsis welcomed the promised ship, but complained that the radical left-led government did little to help his island until Flambouraris stepped in. "The government was asleep," he told private Skai TV Wednesday. "How come (now) we can talk normally with one minister?"

Tourism-reliant Kos, which received 7,000 migrants last month and has seen tourist arrivals drop by about 7 percent this year, is a stark study in contrasts. Boatloads of refugees arrive in the rosy hues of dawn as the last revelers are straggling out of night clubs and joggers run along the seafront. Mega yachts and cruise ships anchor just off the detention center, refugees sleep on bicycle lanes forcing cycling tourists to swerve, and bikini-clad visitors stroll along next to a man in a traditional Iraqi dress.

Scores of Syrians landed early Wednesday, crossing the 4-kilometer (2.5-mile) strait from Turkey in rubber boats which, in many cases, local men rush to carry away for their own use. "I feel good to be here, but I still miss my family" in Syria, said Omar Mohammad, a 25-year-old English literature graduate from Aleppo. Unlike during past immigration crises in Greece since the early 1990s, this time the refugees don't want to stay. Their destinations are wealthy countries such as Germany or the Netherlands, and all they seek from Greece is temporary travel papers to continue their trek through the Balkans and central Europe. So they end up in the old stadium or outside on the beachfront, in tents, or under trees.

Inside the stadium, three police clerks were struggling to register hundreds of refugees, and for the second day used fire-extinguishers to control the jostling crowd. An estimated 300 travel documents were handed out by early afternoon since the morning. The office on Kos for Doctors Without Borders, the medical charity, strongly deplored the conditions in the stadium, where most refugees were sent after being evicted from makeshift camps all around the town. "What we see now is a completely disproportionate focus on security management of these people without the relative humanitarian assistance that they need," said Vangelis Orfanoudakis from the charity, which is also known as Medecins Sans Frontieres. "There are just two toilets. No access to water. They now have put a water hose for all the people, the situation is really dramatic," he said.

Municipal officials weren't available to comment Wednesday, but have long been lobbying for the refugees to be taken to mainland Greece. Mayor Kyritsis has pledged to get them off parks and public areas. MSF's Julia Kourafa said some refugees had fainted from exhaustion or hunger in the stadium. Hundreds were seen climbing the 12-foot perimeter wall to go and buy food, and one man was taken away in an ambulance after he fell and seriously injured his leg. Some refugees set up tents in the little shade available, while MSF teams were planning to erect awnings.

"The situation here is very bad and police here they beat a boy, they beat a man, they beat children. It's too bad," Syrian refugee Laith Saleh, who is in the stadium, told The Associated Press by phone Wednesday. "We can't go out." A group of young Syrian men from Latakia, who had just arrived in the morning after an Italian coast guard vessel from a European border watch mission picked up their boat in the sea, rested on a pavement behind the stadium and planned their next moves. Across the road, an elderly Greek couple handed out food to refugees perched on the wall.

"Aleppo is the worst city in the world," said Dirar, another English graduate who made the crossing with Mohammad's group. He didn't give his last name to protect family in Syria. "There's no electricity, no water, no Internet. My home was destroyed by a rocket blast," he said, showing a picture on his mobile phone of himself in the wreckage. "I was so happy to be alive that I took a selfie," he said. "From Greece, I will travel through Macedonia, Serbia and Hungary to Germany."

Last month, a report released by the International Organization for Migration (IOM) revealed that Greece is now the largest arrival point, coincidentally during one of its worst ever economic crises. Until 2015, the rise in Mediterranean Sea arrivals was seen primarily in Italy, but that picture changed this year. Greece has become the main gateway to Europe for tens of thousands of refugees and economic migrants, mainly Syrians fleeing war, as fighting in Libya has made the alternative route from north Africa to Italy increasingly dangerous. Nearly 130,000 people have arrived since January on the eastern Aegean Sea islands from nearby Turkey, a 750 percent increase over the last year.

Meanwhile, Anadolu Agency reported that the Greek Coast Guard punctured a refugee dinghy carrying 58 refugees and left them for dead, but Turkish fishermen, who were there by chance, saved them from drowning. According to the report, the dinghy left the Karaburun district of İzmir and headed to Greece to reach Europe. However, Greek soldiers reportedly entered Turkish territorial waters to stop the refugees from arriving in Greece and punctured the dinghy in the middle of the sea. Some of the refugees fell overboard and cried for help. The report claimed that Turkish fishermen recorded videos revealing the miserable situation of the refugees and called the Turkish Coast Guard, while taking refugees in their fishing boats at the same time. There were children and women in the dinghy according to the claims. The Turkish Coast Guard has launched legal action over the incident.
RELATED TOPICS